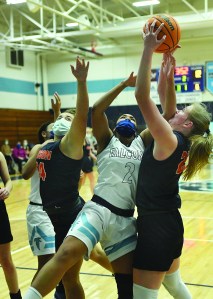 Carson’s Mary Spry has been tough inside. Photo by Wayne Hinshaw, for the Salisbury Post.

TROUTMAN — There’s no substitute for experience, and Carson’s girls basketball team has a strong senior class.

The Cougars crushed South Iredell 70-29 on Friday to finish unbeaten in conference play for the first time in school history.

Senior Colbie Perry was destructive in Carson’s latest romp, with seven 3-pointers and a career-best 28 points.

Mary Spry was 7-for-9 from the field for 16 points and had six rebounds.

Carson played without the Isley sisters but scored 28 in the first quarter and was up 53-17 at halftime.

Just how good Carson is, is hard to tell from the stat sheet, as Cougars are usually only playing half the game. Colbie Perry is the leading scorer with 15.1 points per game. Spry averages 12.6, and Wilhelm averages 10.3.

Carson’s closest game this year was a 71-46 win at West Rowan.

Carson will be the top seed for next week’s NPC tournament.

Carson is ranked seventh in 3A by MaxPreps.