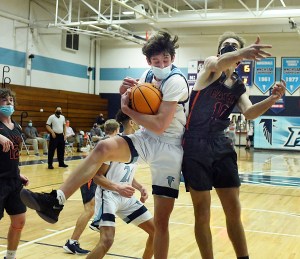 Carson’s Brodie Johnson battles on the boards against West Rowan.Photo by Wayne Hinshaw, for the Salisbury Post.

Carson had South Iredell on the ropes on Friday on the road but couldn’t finish off the Vikings.

South Iredell’s updated record reflects a forfeit win for the game that the Vikings lost to East Rowan on the court in Granite Quarry. That change is per MaxPreps.

No change has been made at this time by MaxPreps as far as Carson’s record. The Cougars lost twice to East.

Carson nearly had Friday’s battle wrapped up late in regulation, but the bounces and the whistles didn’t go the Cougars’ way. South Iredell got clutch 3-pointers down the stretch from San McLeod and Chase Labelle.

“We had our chances to  put it away a couple of times,” Carson coach Brian Perry said.

It was 58-all at the end of regulation.

In the extra session, Carson missed four straight free throws when the game was up for grabs.

Carson missed AJ Merriman (ankle). His quickness could have take some of the pressure off Carson’s ball-handlers against South Iredell’s pressure.