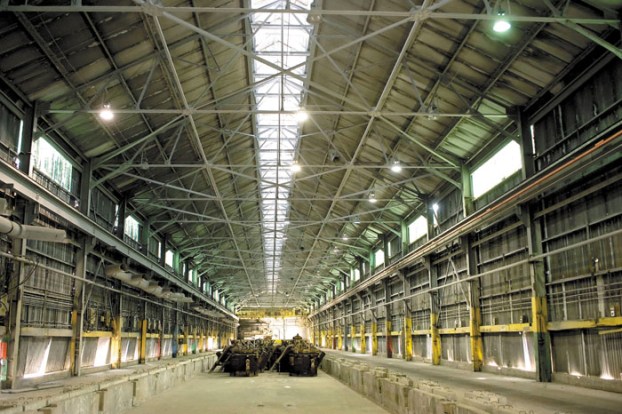 With on-site hazardous waste from Alcoa Badin Works continuing to leach into nearby waters in Badin, including the Little Mountain Creek, the company is working on a proposed deal with the N.C. Department of Environmental Quality to divert contaminants, including cyanide and fluoride, to a different discharge point.

High levels of cyanide and fluoride have routinely been detected in stormwater flowing from Alcoa through a discharge point known as “Outfall 005.” The outfall sends water into Little Mountain Creek, where it thens flows into Badin Lake.

Under the proposal, called a special order of consent, Alcoa has until June 2022 to modify its existing stormwater piping system to divert and pump water from Outfall 005. In response to an order in 2018 requiring the company to set permit limits on the amount of cyanide and fluoride it could send into Little Mountain Creek, Alcoa built the stormwater treatment system, but unlawful amounts of contaminants still leached into the water.

DEQ has not yet approved the new proposal.

“The Division of Water Resources Director is reviewing all options, with the proposed SOC being one of them,” DEQ spokesperson Anna Gurney said.

People can be exposed to cyanide by “breathing it, absorbing it through their skin, or eating foods that contain it,” according to the Centers for Disease Control and Prevention. Small amounts of cyanide can cause dizziness, headache, nausea and vomiting and rapid breathing, while large amounts could cause respiratory failure leading to death. Exposure to high levels of fluoride could potentially result in tooth decay.

“The source of this pollution is hazardous waste that was improperly disposed of on the site for close to 100 years,” said Ryke Longest, co-director of Duke University’s Environmental Law and Policy Clinic. For the past decade, the clinic has been examining the hazardous waste produced by Alcoa on behalf of the Yadkin Riverkeeper.

Although Alcoa shut down its Badin operation in 2010, the spent potliner is still buried in the ground. Alcoa has since formed a spinoff company, Badin Business Park.

The contaminants include toxic fluoride and cyanide that are leachable in water along with polychlorinated biphenyls (PCBs) and polycyclic aromatic hydrocarbons (PAHs).

While Alcoa has received state permits to handle hazardous waste over the years, it still hasn’t dealt with the underlying problem of the buried spent potliner, Longest said.

“It’s that spent potliner which is leaching out the cyanide and fluoride and some other trace metals,” he said.

In December 2019, Duke sent a letter to DEQ after it analyzed Alcoa’s efforts to remedy the ongoing issue, noting Alcoa’s data showed it has “failed to protect the environment of Badin and the Yadkin River basin from this pollution.” Throughout its review of Alcoa’s corrective measures, “we were surprised by the cavalier conclusions of the investigative reports filed by Alcoa’s consultants.” The letter noted that when contaminants were identified through sampling, many of Alcoa’s reports “dismissed the contamination.”

“It’s the third time that Alcoa has failed to figure out how to comply with cyanide limits and the third time it’s gone to the state to get help and move the goal posts yet again,” Longest added.

Jim Beck, an Alcoa spokesperson, sent the Stanly News & Press an emailed statement in relation to the new proposal.

“We take our environmental responsibilities seriously, and we are working with the North Carolina Department of Environmental Quality to ensure compliance with our water discharge permit,” Beck wrote. “We are planning to modify an existing stormwater piping system that will enable Badin Business Park to better manage water at the site. The project, which should be complete in the summer of 2022, will use an existing diffuser, which has operated in Badin Lake for decades. It will help ensure that overall concentrations are below both the state and federal standards and are protective of human health and the environment.”

In response to the proposal, Chandra Taylor, a senior attorney with the Southern Environmental Law Center, which represented Concerned Citizens of West Badin in litigation against Alcoa a few years ago, wrote to DEQ expressing citizens’ concerns.

“Because this proposed SOC does not stop or alleviate the contamination, but rather re-routes and obscures it, we respectfully request that you deny the SOC application, and work collaboratively with the public, the permittee, and the Solid Waste Division to require clean-up of the waste that is the source of the on-going water pollution,” Taylor wrote.

Concerned Citizens of West Badin is a group of concerned residents and friends of people in the historically Black community near Badin Lake. The group advocates for community-wide healthy land and clean water in and around Badin.

Taylor was far from the only person who wrote to the DEQ about Alcoa’s SOC application. In total, the DEQ received more than 300 public comments. The Yadkin Riverkeeper, who has worked with both the Southern Environmental Law Center and concerned citizens to oppose the application, helped facilitate public comment on social media and through its membership base by posting a template that citizens could personalize and use.

“It’s a significant amount, and I do believe the state was surprised by the number of comments,” said Edgar Miller, executive director of the Yadkin Riverkeeper.

Alcoa is required each month to test the water that comes out of pipes of its drainage system; the reports have consistently shown it is exceeding state limits for cyanide, Taylor told the Stanly News and Press. If the discharge gets redirected into Badin Lake, “it will be measured differently because now it will be measured in its diluted form.”

“There’s no reason why the state should agree to this,” Taylor said.

Instead of diverting the contaminated water from Little Mountain Creek to Badin Lake, Taylor said Alcoa should build a collection system and then treat it to remove the contaminants.

Longest, Taylor and Miller have asked DEQ to hold a public meeting regarding the proposed SOC, but no meeting has been arranged.

“At a minimum, that’s what we want to have happened here,” Miller said. “Not only so we can express our concerns about how this relates to their water quality permit, but also so the community can learn about this proposal and understand what’s at stake here.”

If a public hearing is conducted, Miller said the Yadkin Riverkeeper would work to ensure local stakeholders are able to express their opinions about the new proposal.

The Yadkin Riverkeeper opposes the proposal, but Miller said the organization’s end goal is to force Alcoa to excavate and completely remove the hazardous material from the site instead of releasing it into the water.

West Badin resident Macy Hinson, 74, has lived in the town his whole life and worked for Alcoa for almost 40 years. He said many Black people who worked for the company were given less desirable jobs and, in his view, were more likely to be exposed to hazardous material.

He said he knows several people who suffer from asbestosis, a chronic lung disease caused by inhaling asbestos fibers.

“The frustrating part is that they’re not doing anything about the material that is being dumped and they want to just hope it will go away and people will stop talking about it, but that’s not going to clear up the area,” said Hinson, who is the president of the Concerned Citizens of West Badin. He’s most concerned about the buried hazardous waste in and around his community.

Hinson noted that by diverting the contaminated water to another discharge point in the area, Alcoa would not be addressing the key problem.

“You’re just gonna move it from one site to another and it’s not clearing it up,” he said. “To clear it up it needs to be cleaned up.”

By Natalie Anderson natalie.anderson@salisburypost.com SALISBURY — After a financially uncertain 2020 and as the Salisbury Police department and public works... read more