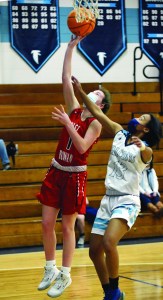 OLIN — East Rowan’s girls lost at North Iredell 69-37 on Friday, the 10th straight loss for the Mustangs and the ninth straight in the league.

East has had a chance in several North Piedmont Conference games, but not in this one. North Iredell outscored East 17-4 in the second quarter and held a secure 31-12 lead at halftime.

North Iredell (5-4, 5-4) has good size and has played well the last two weeks, including a victory against West Rowan.

This was East’s first meeting with North Iredell.

The only team to win at North Iredell this season was Carson.