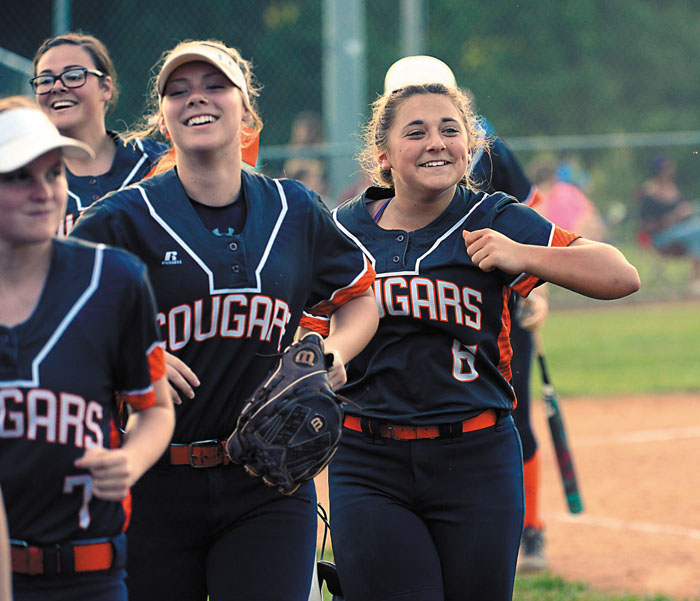 Carson senior Kary Hales still hasn’t decided which sport she loves the most. A perennial all-county player, she’s going to attempt to play both in college.

As far as choosing a college at which to play and study, that was a lot easier question to resolve. She’s staying local.

Her grandfather, Karl Hales, is a retired Catawba professor who founded the school’s communication arts department and devoted 39 years to the college. He’s well-known as the resonant P.A. voice of Catawba football.

“It’s not like I’m going to Catawba just because my parents went there,” Hales said. “But it was an important factor that it’s close and it will give my grandparents a chance to see me play. They broke down in tears when I told them I was going to Catawba. Because of COVID, they haven’t been able to see me play much lately. We lost the softball season last spring, and fans were limited for volleyball this season.”

Hales has brought opponents to tears over the years, usually rival volleyball coaches and hitters who were certain they had a kill. She’s been able to dig with the best of them. She surpassed 2,000 career digs as a senior and was named recently as Honorable Mention on the High School OT All-State team that includes all classifications.

Her 2,000 digs — she reached the milestone on Senior Night — is one of the highest totals ever recorded in NCHSAA history and is a stat she’s proud of. She managed 300 digs in a condensed senior season.

“The 2,000 digs meant a lot, but my favorite volleyball memories are from early in my career,” Hales said. “Freshman year, when no one had any idea who I was and no one had any expectations for me, and I just went out and played as hard as I could. We always stood our ground as a team that season. Then sophomore year, winning the conference tournament as underdogs was a great memory.”

Carson head volleyball coach Kelan Rogers has said more than once that Hales is the best defensive player he’s coached in his 30 years in the sport.

“Most of all, Kary hates to lose,” Rogers said. “I like that about her.”

Hales probably has made some opposing pitchers retire after facing her on a softball diamond. She’s swung the bat with ferocity and serious production for coach Charissa Duncan.

Hales batted .495 with two homers and 11 doubles as a freshman in the spring of 2018 when Carson made a playoff run all the way to the regional championship series. No Carson team had ever made it that far.

There’s no telling how destructive Hales might have been as a junior last spring. She was batting .647 (11-for-17) and already had a homer when COVID halted the season.

As far as position, she’s got experience at all the infield spots. Her bat has been so lethal that coaches find a place for her in the lineup.

Hales has been known to Rowan sports fans since 2015.

She was one of the Little League World Series girls who brought home a title from Oregon in 2015 and finished as runner-up in 2016.

“It was all amazing, but we were  young and we couldn’t fully appreciate it at the time,” Hales said. “It was just another weekend tournament we were playing in, but then all of a sudden we’re playing in Oregon and people are watching us on television. What I remember most isn’t the games, it’s the off-the-field experiences that we had. Those teammates, even the ones who play for rival high schools, are still great friends, and that will never change. We shared something special, and as the years go by, we realize it more. We had a reunion tournament not long ago, and it was the same as it always was. We had a great time being together and playing together.”

Hales has a third sport, although it’s definitely third on the list. She plays basketball. She’s a reserve on Carson’s undefeated team. She didn’t play as a junior because basketball was overlapping with softball, but she’s made a comeback this year and has made a contribution and is getting quite a few minutes. She had six rebounds in Tuesday’s Senior Night victory against West Rowan. She’s boosted Carson’s intensity and effort level even higher than normal.

“The thing about Kary is that whatever she does, she’s all-in,” Carson head basketball coach Brooke Stouder said. “When she’s with us playing basketball, she’s totally engaged with basketball. She’s such a competitor. She brings grit and tenacity every night and she understands the game. She rebounds well. She’s physical. She’s tough. She’s given us a lot, and we’re thrilled to have her.”

Hales is also a standout student.

Her plan for college is to major in exercise science. That course of study will provide some career options. She’ll see where that takes her.

“Catawba has a great exercise program, and that helped make the school the right fit,” Hales said.

She plans to live on campus because she believes that’s an important part of the college experience.

As far as volleyball or softball, she doesn’t have to choose quite yet.

She’s good enough that she’s got a chance to be successful at either. She may be able to help the Indians in both sports, although that’s a challenging road at the college level. When one sport is in season, the other is usually having conditioning sessions or workouts. It’s hard to go to class and still show up for everything without getting worn down.

Then she’ll crush more softballs when her senior season gets started in March.