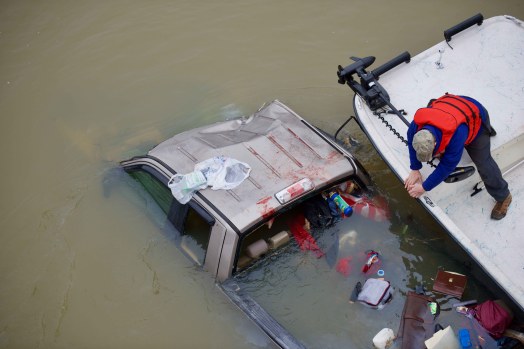 Carl Blankenship/Salisbury Post - The truck the victim was on top of when he was rescued. He was in the water at about 8:30 a.m. and the incident was first reported by a fisherman near High Rock Dam. 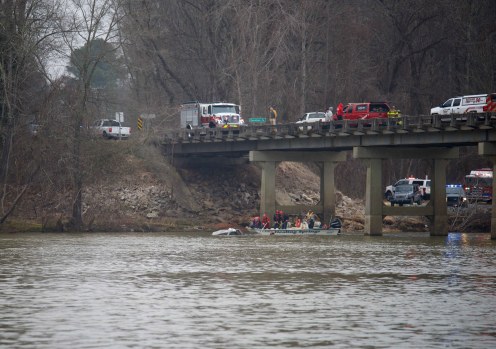 Carl Blankenship/Salisbury Post - First responders pulling up to the wreckage in the water.

TUCKERTOWN RESERVOIR – A man spent a hours on top of his truck Thursday before being rescued from Tuckertown Reservoir near High Rock Dam.

Emergency personnel responding to the incident said the truck appeared to run off of Bringle Ferry Road immediately before reaching the bridge. The victim, who wasn’t immediately named, was alert, bleeding from his forehead and had a broken leg. His vehicle was traveling from Davidson into Rowan County before landing in the water.

The man had been on top of his vehicle since 8:30 a.m. After being spotted by a fisherman, rescuers pulled him from the water at about 11 a.m. and transported him to Wake Forest Baptist Medical Center.

Healing Springs Fire Department, out of Davidson County, was the first department on scene and deployed its water rescue team. Deputy Chief David Pope said vehicles in the water are unusual and incidents in the area are usually boat-related.

Salisbury Fire Department Battalion Chief Nick Martin said first responders aren’t sure how the vehicle came to rest where it was found.

Windows on the truck had been shattered, the passenger-side door appeared to be ripped open and the roof was visibly bloody after the victim was transported away.

Pope said Davidson and Rowan rescuers train for this kind of incident and are familiar with this patch of water because of past rescues.