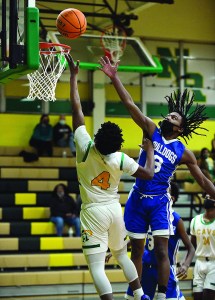 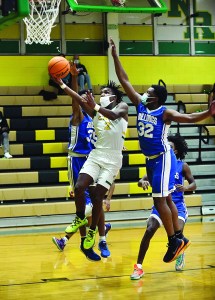 It was  solid season, 22-8. The Cavaliers had tied for first place in the Yadkin Valley Conference with a 14-2 record and had smashed Chatham Central in the YVC tournament championship game by 24 points.

Then they won two playoff games.

That season was supposed to be only the foundation for much larger things to come.

Leading those potential returners was 6-foot-10 Brandon White, who had blossomed as a sophomore at North and figured to be one of the state’s top returning prospects, certainly a dominant player at the 1A level.

But change was coming.

“It didn’t happen all at once, but by the time this season finally started those nine potential returners had been greatly reduced,” Causby said. “Brandon White (as well as guard James Gladden) transferred to a Winston-Salem Christian, a private school. Some of our kids decided to concentrate on football. And with virtual school, and only having guys here two days a week, some of our guys just went by the wayside.”

When the season began, North had two players with substantial varsity experience — senior Kendrell Goodes and junior Quashawn Carpenter. Kyree Sims and Kendal Mitchell had been members of last season’s team, but had seen limited minutes.

North opened with a loss at Lexington, followed quickly by YVC losses to North Stanly, Chatham Central and Uwharrie Charter.

“We’re 0-4 right away and we were playing like we were at Catawba team camp, not like we were in the regular season,” Causby said. “We were so far behind where we usually are. That time you put in during the summer months is so important as far as bringing a young team together.”

No one had summer camps, so when this season started, the veteran clubs had a huge advantage. For a team like North, where a new group was trying to find its identity, the early games were ugly.

“We weren’t playing our game, I guess, but at that point we didn’t really have any idea what our game was,” Causby said. “It took us a while to figure things out. And, unfortunately, we opened conference play with the meat of our schedule. North Stanly, Chatham Central and Uwharrie are the teams at the top of our league.”

North finally got a win on the road at South Stanly. Derrick Hanson, a 6-foot-4 junior, led the way with 20 points.

After a 17-point non-conference loss to Thomasville, North got things turned around for good against Albemarle. Carpenter had been feeling the weight of the death of his grandfather, his best friend, but he scored a career-high 27 to lead the win against Albemarle, and his teammates rallied around him with their best effort.

The Cavaliers, now 6-5 and 5-3 in the league, haven’t lost since that Albemarle game.

They beat an improved North Moore team 65-55 on Wednesday’s Senior Night, with Goodes returning to action after a knee strain and scoring a season-high 16. His points included some energizing dunks.

“We didn’t play great and we let them get back into it in the third quarter when we had the chance to put them away,” Causby said. “But we definitely are playing a lot better now than we were when the season started. We’re only playing teams in the conference once this year instead of home-and-home, so I really wish we could flip the schedule. If we could play those teams that beat us now, it might be a lot different.”

Causby has been impressed by the team’s focus. Even when North was 0-4, no one opted out or gave up.

“Look, football is just around the corner for some of these guys, and heading to football would’ve been an easy out, but they’ve stayed locked in with basketball,” Causby said. “I can’t say enough about these guys and their resilience. They had every opportunity to fold, but they kept coming to work every day. Now that work is paying off.”

North owns  a five-game winning streak. North is scoring in the high 60s and 70s now, instead of in the 40s.

North’s boys are finished with conference play, and the YVC voted not to hold a league tournament. Causby is disappointed with that state of affairs because he believes his team could make a tournament run.

The good news is North still has three non-conference games left to play in this unique COVID season, starting with a trip to Hickory to play St. Stephens on Friday.

“Mathematically, we’re still in the hunt to make the playoffs, although we would need some help to do that,” Causby said. “Right now, we just want to get the most that we can out of the three games we’ve got left. We’ve got a game with Chatham Charter coming up. They’re undefeated, but I know our guys are looking forward to it. That game will give us a good gauge on how far we’ve come together since we started.”