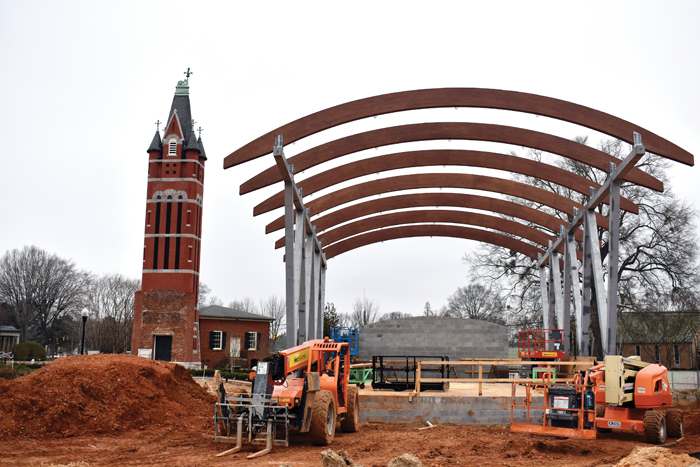 The tall ceiling and open sides on the stage will allow for performances and shows to be seen by spectators throughout the park. Ben Stansell/Salisbury Post

SALISBURY — With the stage now in place, Dyke Messinger is starting to think about the countless ways Bell Tower Green Park will be used once it’s complete.

“The creative use of this space, we haven’t even touched what’s going to happen,” said Messinger, president of Bell Tower Green Park. “Everybody knows bands, weddings and gatherings, but wait until people start to get creative. You may have little markets strung along the sidewalks. Maybe we have our own Christmas market here, I don’t know. That’s what’s going to be fun to see is how the community uses the park.”

The stage, with its soaring steel sides and still-visible wooden rafters, was installed in the park last week. Messinger said it’s the last major piece that will be added to the park. It’s also a sign of more progress to come.

Although the site for the park is still mostly concrete and red dirt, Bell Tower Green Park Vice President Jason Walser said it will start to look more lush by May. That’s when grass, trees and flowers will be added.

Walser expects the park to be finished by July, when its ownership will be turned over to the city. That’s nearly two years after ground was broken on the project in August 2019. The park’s grand opening celebration will come later and will likely coincide with Pops at the Post, which is scheduled for Sept. 11.

Walser said he expects parts of the park to be opened to the public whenever they’re completed, making for a gradual rollout.

“I think it’s fair to say we can anticipate that the park won’t be opened magically one day,” Walser said. “There will be sections that come open that we won’t keep people out of as we finish things off.”

Having a stage was always an integral part of the design for Bell Tower Green Park.

That’s why Messinger was so worried last summer when the park’s organizers were considering cutting the piece in order to meet the budget.

“When we faced our money crunch last summer before the market returned, it was on the chopping block,” Messinger said.

The stage’s future was weighed against plans to pave the three streets (West Fisher Street, South Church Street and South Jackson Street) surrounding the park with bricks. In the end, the park’s organizers decided that the stage was a necessity, while the brick-paved streets were not.

“The stage, for the city, is as important as anything else for this park,” Messinger said.

The 30-by-30 foot stage, which will feature a soon-to-be installed 35-foot tall covered roof, was designed with function in mind.

“It’s gotta be acoustically correct,” Messinger said. “The curved shape and the tilt, that’s critical to the projection of sound. The height is for movies at the park. They’ll bring a screen down and that screen is a certain size and you’ve got to get it high enough so that wherever you are you can see it.” 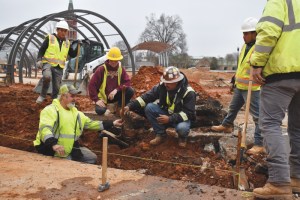 The stage will be surrounded by a grassy expanse about an acre large on which spectators will be able to spread out and watch performances. Walser jokes that because of the stage’s design the best seat might not even be in the Bell Tower Green Park.

“The concert is going to project right up to the third floor of Go Burrito,” Walser said. “That’ll be the hottest ticket in town. You’ll be able to see it from the rooftop bar.”

Future of the Wrenn House

While construction is nearing completion on the majority of Bell Tower Green Park, progress is only set to begin on extensive renovations to the historic Wrenn House that will accommodate a new tenant.

Messinger said the Bell Tower Green organization is nearing an agreement with a restaurateur who wants to open an eatery in the two-story building.

Messinger expects the renovation project in the Wrenn House to begin in the late spring. Some work has already been completed to refurbish the building, which was built in the early 1800s, but much has yet to be done.

“We’ll be spending about $1.2 million to bring it up to the kind of standard this restaurant wants and what we believe Salisbury will want,” Messinger said.

Messinger said that the organization is approaching the renovations to the Wrenn House as a separate project, but some of the funding will overlap. Several park donors earmarked their donations to help renovate the building.

With the budgetary constraints that faced the park in the summer, Messinger said the organization wasn’t anticipating being able to refurbish the building until well after the park was completed. The pending agreement with the restaurant changed that timeline.

“With the rent we project, we should be able to pay off any debt we incur and then that rent, some of it goes into our maintenance and some of it goes back to the city to help maintain the park,” Messinger said.

By the time construction is complete on the street, the curb will have been expanded by about 15 feet to accommodate the new spaces. When the street reopens, it will still allow for two-way traffic. 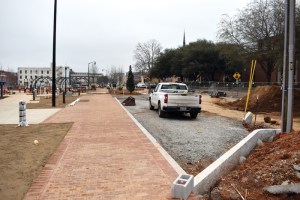 Construction crews are currently expanding West Fisher Street to allow for the installation of more parking spots around the park. Ben Stansell/Salisbury Post

“We’ve sacrificed a decent amount of park to have a nice entrance on Fisher Street and an additional 16 parking spaces,” Walser said.

When those 16 spaces are complete, there will be about 60 parking spots surrounding Bell Tower Green Park on three sides. Most of those will have been added during the construction of the park, but more than a dozen already exist on South Church Street.

The expansion of West Fisher Street and the construction of the brick sidewalk that is going to hug all four sides of the park is being overseen by Alex Garcia with Metrolina Landscape, who Walser said has been “the secret to our success.”

Both Walser and Messinger praised the work done by the over 100 construction workers who have helped build the park.

Possibilities in the park

Although park completion is still months away, Walser said that he’s already been contacted by several people who want to reserve space for an event at Bell Tower Green Park.

“The demand is already there because people see this coming out of the ground and are starting to think that it’ll be a reality for this fall,” Walser said. “For at least the first year, but pretty permanently, it’ll be booked up solid.”

The park’s potential to be a place where major community events happen is exciting to Walser.

“It makes me happy when people think about anything big happening, it’s already ‘What do we do at the park? How do we do it?” Walser said. “I think it’s already becoming the common space.”