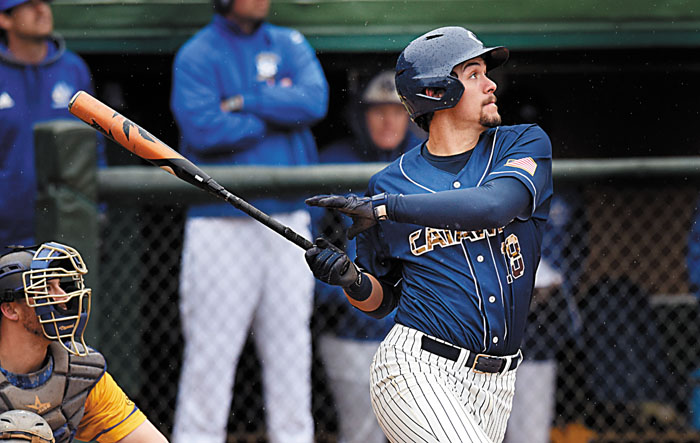 Catawba's Hunter Shepherd watches as a grand slam heads over the fence. File photo by Wayne Hinshaw, for the Salisbury Post

SALISBURY — After a universal redshirt option was granted for the COVID-shortened 2020 season, Catawba head baseball coach Jim Gantt will pilot a team that features unprecented depth and experience.

“It’s a world of difference as far as the maturity level when you’re relying mostly on 22-year-old men instead of 18-year-old kids,” Gantt said. “We’re a lot older and more mature than we usually are. There’s a whole different mentality.”

As is usually the case, Catawba is the preseason favorite in the South Atlantic Conference. It goes without saying that the Indians hope to be factors at the regional and national level, as well.

Catawba appeared to be in the mix for a national championship in 2020. On paper, the Indians will be at least as good as they were last season. It will be hard to be much better than 19-3, and that was after an 0-2 start. Catawba was ranked second in Division II and was destroying baseballs and the egos of opposing pitching staffs when the 2020 season came to a screeching COVID halt on March 11.

Third baseman Jackson Raper, who did some astounding work at the plate, has moved on to play for Illinois, but the rest of a formidable lineup returns intact.

Some talented players such as outfielder Henderson Lentz, who batted .462 in 10 games last year, figure to be in bench roles, as long as everyone stays healthy. That’s how good Catawba is.

“We’ve got a whole lot of depth in the field, and we think we’ve got some pretty good depth on the mound, as well,” Gantt said. “We’ve got a whole lot of lineup options, and I believe we will hit. I hope we can pitch as well as we hit. It’s been hard to tell because our pitchers have only been pitching to our hitters. But we’ve also pitched it well, at times.”

For road trips such as the one to Lincoln Memorial this weekend, Catawba will have to take two buses due to player limits on a bus, and that means employing two drivers. New player limits per room will require purchasing more hotel space.

Home games at this time are limited to 100 fans, and those 100 will be on pass lists consisting of family and friends of players and coaches.

The schedule format is much different, mostly SAC doubleheaders on Fridays and Saturdays, instead of the standard three-game weekend series. That’s going to test the depth of starting rotations and bullpens as never before.

“You can’t have just one closer now,” Gantt said. “You can’t ask someone to save four games in two days.”

One-third of the team’s players are tested each week for COVID. Catawba has a few players who already have experienced quarantine situations. Gantt said no players have shown symptoms, but they’ve been deemed to have been in “close contact” with people who have tested positive for the virus.

“The COVID protocols are pretty horrendous,” Gantt said. “There are a lot of factors to deal with.”

COVID continues to cast a giant, dark shadow over everything, but Catawba moves forward with the hope that the entire schedule can be played.

The ball field for Catawba — historic Newman Park — will be undergoing a massive makeover and facelift shortly after this season ends.

Reinforced by the wave of seasoned 2020 seniors who elected to come back for a final year on the diamond, Catawba wields a powerful 53-man roster. Fourteen are Rowan homeschoolers or products of Rowan high schools.

Shepherd is good enough as a two-way player that he may be a national player of the year candidate. He owns 23 career wins as a lefty pitcher and swings the bat with sufficient power that he’ll hit in the middle of the lineup even when he pitches. When he doesn’t pitch, he’s a quality first baseman. He can rest occasionally as a DH. He was a terrifying force at the plate in the abbreviated 2020 season — nine homers, 26 RBIs and a .447 batting average in 21 games.

“We’ll pitch him early in every series,” Gantt said. “We won’t ask him to play three games in the field, and then pitch.”

Ketchie, another lefty, owns 21 career wins and has made 43 starts for the Indians.

Strickland will be a key man in long relief, short relief or as a starter in the postseason.

Simpson is a brilliant shortstop defensively. He was mostly a glove man in high school, but maturity, his work ethic and Catawba’s weight room have transformed him into a serious offensive threat with extra-base power. He batted .353 in 2020.

“Jeremy has been around a long time,” Gantt said. “But as long as we’ve got him, we’ll be happy to run him out there and let him play shortstop.”

Simpson is the anchor for a defense that Gantt says makes two or three amazing plays at every practice.

When Shepherd is on the mound, the Indians can use hard-hitting Dylan Wilkinson at first base.

Joe Butts is an exceptional player at second base. He’s a solid hitter and he can run and defend.

The third baseman will be new, with Raper gone. Pfeiffer transfer Jake Rowden is expected to step in at the hot corner. Cameron Mills is another option at third base.

The outfield could be outstanding. Luke Spiva, who came to Catawba last year after Winston-Salem State’s program folded, brings a big bat to left field. Former junior college phenom Bryce Butler brings stunning speed to center field. He’ll catch it if it stays in the ball park and he can steal a base anytime he gets on. Lee Poteat, who hit .344 in 2020, provides speed, power, defense and experience in right field.

Cameron Morrison is still around behind the plate. He’s been stellar defensively for years, and he was outstanding offensively in 2020. His slugging percentage was right up there with Shepherd and Raper. He hit .436 with five homers.

Zack Miller was a powerful addition to the 202 lineup after transferring from Delaware. He produced six homers and 22 RBIs in 85 at-bats. Miller is also a catcher by trade, but Gantt will try to keep the bats of Morrison and Miller in the lineup together as often as possible. One can serve as the DH. First base is another option.

Behind that crew are talented players such as Lentz, Robbie Cowie and Trenton Walsh. Harris Jackson is a freshman infielder who has impressed Gantt.

The 6-foot-8 Linkous is a potential breakout guy who had an electrifying preseason. Holshouser, the former Carson lefty, is a transfer from UNC Greensboro and has transformed himself physically since his high school days. Ketchie (4-1), Brown (2-2) and Shepherd (3-0) were solid rotation members last season. Brown’s 2-2 record is deceiving. His ERA was 1.72.

Along with Strickland (2-0), Caleb Link (2-0) will be an important guy in the bullpen again. Cowie, Kenny Dollinger, Tyrese Hearst, Trent Montgomery and Mason Gwyn had roles last season and are back. Ben Gilks,a Guilford Tech transfer, could be an important addition. Pearce Wilhelm throws hard and has experience, but he’s been dealing with a back issue.

One more name to keep in mind is Marshall Raper, a freshman pitcher/catcher who is Jackson’s younger brother. He’s been limited by a thumb injury, but Gantt said he has all kinds of tools, including great arm strength.

Michael Lowman and Russ Weiker return as assistant coaches. Bobby Parnell, an East Rowan graduate and former MLB closer, is helping as a volunteer coach, as well as Joel Burgess.