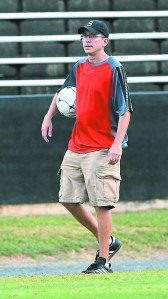 Staff report
SALISBURY — Freshman Carlos Henriquez converted a penalty kick in the first half, and Salisbury’a boys soccer team managed a hard-fought 1-1 draw with Thomasville in the Central Carolina Conference opener for both teams.
“It’s the first time in my coaching career, boys or girls, that I’ve let a freshman take the first penalty kick of the season,” Salisbury head coach Matt Parrish said.
Salisbury (3-0-1)  controlled the majority of the action, but couldn’t find the back of the net during the run of play.
“The offense has struggled thus far this season and that falls largely on me,” Parrish said.  “I need to find the best combinations going forward and haven’t quite solved the problem yet. Our work rate is solid and the desire is high but something is slightly off. I just have to figure it out.”
Up next for the Hornets is another tough CCC match at West Davidson on Monday evening at 5 p.m.
You Might Like