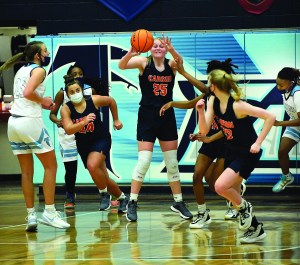 Carson’s Mary Spray starts a fastbreak with an outlet pass. Photo by Wayne Hinshaw, for the Salisbury Post. 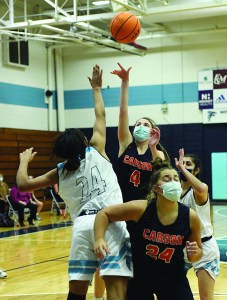 CHINA GROVE — It’s not like Carson’s girls basketball team was going to lose on Senior Night.

Colbie Perry, Carleigh Perry, Lani Isley and Ellie Wilhelm have been cornerstones of a terrific program for four years, and they celebrated with a 78-38 victory against West Rowan.

In this COVID season, the core four has been rejoined by Kary Hales and joined by Jaden Vaughn and Tate Barger to give the Cougars a seven-deep senior class.

Carson (11-0, 9-0) has demolished everything in its path to this point, including Tuesday’s 40-point win against the second-place team in the North Piedmont Conference.

Carson is averaging 65.8 points, while allowing 26.8 points — a 39-point differential — so other than the balloons and flowers, this was just another night at the office.

“We had a few lulls, but we can put some points up when we’re getting out in transition and we played a really good first half,” Carson head coach Brooke Stouder said. “We’ve got a great group of seniors, and it was a good night all-around for them. I’ve got tremendous respect for the careers they’ve had. They’ve meant so much to us.”

Carson is 88-11 over the past four seasons. For the seniors who have had good luck with health, their game on Friday will be their 100th together.

“That’s a lot of experience,” Stouder said. “Our experience makes the difference for us right now. West is talented and this freshman class they have is good and those girls are going to keep improving. They’ve had a really strong season.”

Carson had both long-range shooters in a groove against the Falcons, and it’s hard for any team to deal with that.

Both did almost all of their damage in the first half. They combined for 26 points before halftime. Carson led 47-18 at the break.

Carson finishes the regular season at South Iredell, while West will be home against Statesville.