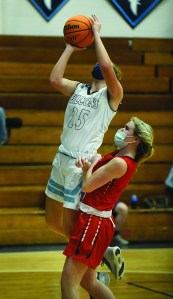 East’s Peyton Whicker in action against West Rowan.  Photo by Wayne Hinshaw, for the Salisbury Post.

STATESVILLE — In a season notable for effort and improvement, East Rowan’s girls took a step back on Friday.

The Mustangs were beaten 60-32 by North Piedmont Conference opponent Statesville, a team they lost to by 10 in Granite Quarry.

‘We struggled to rebound and we struggled to score,” East head coach Kevin Holland said. “It’s tough when they’re getting three or four shots on each possession and we get one.”

East had a bad start, a three-point first quarter, and was down 26-13 at the half.

It didn’t get any better.

“This was, by far, the most frustrating game of the season,” Holland said. “We’ve been playing better — but not tonight.”