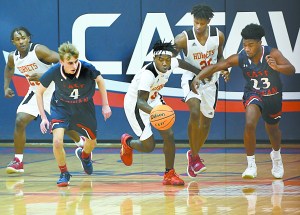 East’s  Vincent Jones (23) had a career game in Tuesday’s loss at Statesville. Photo By Wayne Hinshaw, for the Salisbury Post.

Statesville (4-5, 4-5) managed to split the season series with a 70-64 North Piedmont Conference victory on Tuesday and moved into a tie with the Mustangs in the standings.

East (5-6, 4-5) had handled the Greyhounds in Granite Quarry, but that was on a night that Dylan Valley was hot and tossed in 22 points from long range.

The 3-point line was not East’s friend in the rematch. East shot 2-for-17 on 3s Tuesday, and that went a long way toward negating Jones’ flawless effort in the paint.

Gavin Sprinkle played for the first time in a number of weeks and made a 3-pointer.

East wraps up the regular season with a tough assignment on Friday, a road game at North Iredell. North Iredell beat East 64-53 in Granite Quarry.

Statesville finishes up the regular season at West Rowan.