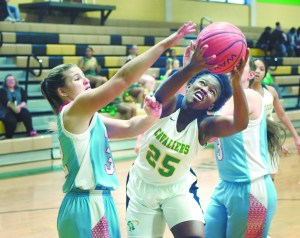 It was Senior Night in Spencer, and the Cavaliers (8-2, 7-0) celebrated. They got 12 points and seven rebounds from Makiya McDaniel, the lone senior on a very young team.

“It was a great Senior Night for Makiya,” North coach Anthia Smith said. “Everyone got in the books tonight, and we shared the ball well.”

Freshman Bailee Goodlett had a huge game with a career-high 20 points and eight steals.

North’s girls will play for the third night in a row on Thursday when they travel to Gray Stone and try to finish a perfect YVC season.