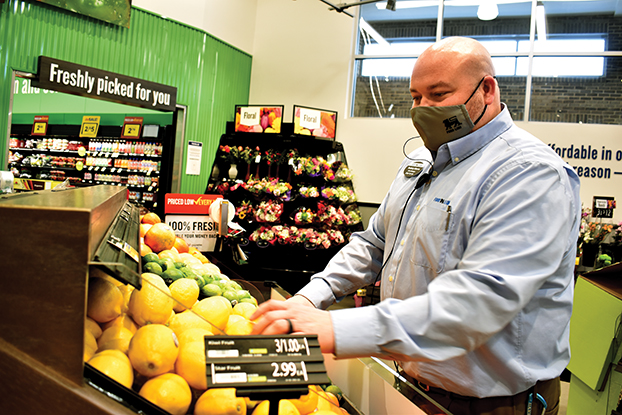 Rodney Moore arranges fruit in the produce section of the Food Lion that he manages in China Grove. Ben Stansell/Salisbury Post

CHINA GROVE — After the birth of his child, Matt Armstrong took a few months off from his job working at the Food Lion at 1408 North Main St. in China Grove.

Amongst the congratulatory messages from his family and friends, Armstrong received a few texts from an unlikely source: the store’s manager, Rodney Moore.

“The whole entire time I was out, (Moore) texted me and asked me how the baby was and how it was going,” Armstrong said. “He’s the only store manager I’ve ever known to reach out when I’m sick or something like that.”

Putting people first, Moore said, has been the secret to the success he’s had over the course of his 22-year career with Food Lion.

“I enjoy working with people and seeing people grow and watching people that I’ve taken under my wing be successful,” Moore said. “That’s what really drives me.”

His career with Food Lion started when he was just 16 years old growing up in China Grove.

“I had a couple buddies that worked there and said it was a great place to work. So, I decided to join the team and give it a try,” Moore said.

By the time he finished high school, Moore had been promoted several times and was an assistant store manager. At the age of 20, he was managing a store of his own.

In addition to his passion for people, Moore attributes his rapid ascension in the company to the work ethic instilled in him at a young age by his grandfather, Joe Moore, who owned a tree removal and landscaping company. When young Rodney didn’t have a babysitter, he tagged along and helped out his grandfather.

“At 5 years old, I was learning how to run tractors and use chainsaws,” Rodney Moore said.

Rodney said he learned quickly the intensive outdoor labor wasn’t his “cup of tea.” He preferred to supervise.

“Grandpa used to kill me all the time,” Moore said. “He goes, ‘You’re so much better at telling people what to do than working.’ Later in life, when I became store manager, I went back to him and I said ‘Grandpa, that’s leadership.’ He just giggled.”

Moore has managed several Food Lion stores throughout his career, including locations in Mt. Pleasant and Rockwell, but spent the majority of his time at the grocery store on Faith Road in Salisbury. Last year, Moore was given the opportunity to return to his hometown of China Grove and open a new store at 1408 N. Main St.

“It was pretty cool coming back home,” said Moore, a South Rowan High School graduate. “I see a lot of my old teachers and people I went to high school with and family.”

The store officially opened in June, at a time when groceries were still dealing with supply chain issues as a result of the COVID-19.

“When we got here we realized we needed a lot more help, so we had to do a lot of hiring, which helped the community out too,” Moore said. “It was a learning curve and a challenge, but I like challenges.”

Opening the store in the midst of a pandemic was difficult, but it was also a much-needed distraction for Moore. He was still grieving the loss of his grandfather, who passed away at the end of 2019.

“I knew 2020 was going to be a tough year personally,” Moore said. “It kind of helped a little bit opening this place and the stuff we had to do because of COVID. It was a distraction.”

Despite the difficult circumstances, Moore said that the store has been received well by the community.

Overseeing the opening and successful operations of the store has resulted in personal achievement for Moore. As one of the five Food Lion divisional store managers of the year, he’ll have the opportunity to be named the overall Food Lion brand winner, named in honor of one of Food Lion’s founders, Ralph W. Ketner.

“It would bring back to me what my grandpa always told me that hard work pays off,” Moore said. “It would be outstanding and I don’t even know how to describe it.”

The Food Lion brand winner will be announced at a virtual recognition event on Thursday.