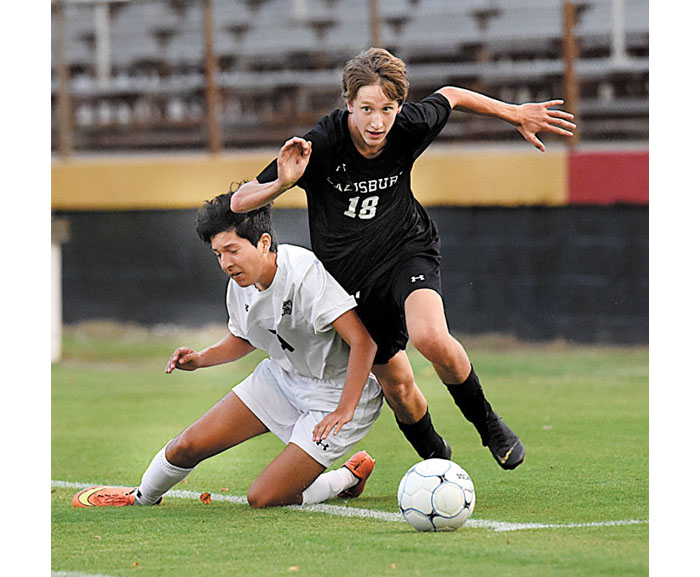 Salisbury’s Will Webb and CATA’s Angelo Diaz go after the ball during a match on Sept. 12, 2019. Photo by Wayne Hinshaw, for the Salisbury Post

Fifth in a series of reports on Rowan County soccer teams …

Playoffs: Lost 4-3 (OT) to Shelby in the second round

SALISBURY — Salisbury’s 16-8 overall record and 12-6 mark in a strong 2A conference in the fall of 2019 would’ve been ample reason to throw a parade at most schools.

But at Salisbury, the bar has been set extremely high by three state championship teams in the last decade, plus a state runner-up. At Salisbury, eight losses is almost unheard of.

Now the Hornets try to keep their terrific tradition going with a squad that is thinner and younger than the norm.

“We lost a dozen guys either to standard graduation, early graduation, ineligibility or jobs,” Salisbury head coach Matt Parrish said. “Some of our guys chose to go to work to help their families who have been affected by COVID, and I totally understand that. We only had 18 come out this year, instead of 30, so we kept all 18. Half of them are freshmen who are still learning our drills.”

It will be a challenging year for Parrish, who like several other county head coaches, also guides his school’s girls program.

“I know I’m already feeling a lot older than the last time I was out here,” Parrish said. “And there’s going to be some overlap this year between the boys and girls seasons. It will get exciting in March.”

The first practice for girls is March 1. Playoffs for the boys start on March 16. Potentially, there’s serious overlap.

Not that anyone is feeling sorry for Parrish or the Hornets.

As always, there’s significant talent on hand and there appears to be a nice mix of swift finishers, unselfish facilitators and hard-nosed defenders. The Hornets figure to keep the new scoreboard at Ludwig Stadium changing frequently.

“We’ve got enough core guys back who understand what it takes to win in this league to have a chance,” Parrish said. “But our league (2A Central Carolina Conference) is an absolute gauntlet of notable teams. Ledford is the defending champion and I’d say that’s the team to beat. I like to think we’re in the top half. I like to think we’ll be competing for one of the three automatic playoff berths. But whether we’re really good or just average, I don’t know yet. It’s early.”

Behind them is goalkeeper Wade Robins. Parrish says he’s the Hornets’ most improved player.

“Wade has upped his game the most since the last time we were playing in November 2019,” Parrish said. “He’s been a rock in the early games. He got clobbered down at CATA and had blood dripping from a knee, but he hung in there. We don’t really have a backup. We’d have to use a field player in goal if something happened to him.”

Salisbury has a junior-heavy team, with only three seniors on the roster. The senior beside Garcia Cortez and Oglesby is Dennis Anaya, who will be running on top and creating scoring chances for teammates.

In Salisbury’s first match, the 2-1 win at CATA, Christopher Portillo, a returning all-county and all-conference standout, had both assists, with Webb, who is extra quick, accounting for both goals.

So that’s five different Hornets directly involved in the scoring in the first two matches. That’s a very good sign.

Salisbury has gotten surprisingly strong play in the early going from two freshmen defenders he didn’t know much about when practice started — Yahir Aviles and Carlos Henriquez Rodriguez.

“They’re learning on the fly, but they’ve been very solid,” Parrish said. “We’ve stuck them out there and we haven’t had to worry about them much.”

This season began with a weather postponement (Forest Hills) and a cancellation (Albemarle couldn’t field a team), but Parrish remains as optimistic and upbeat as ever.

“With all the challenges and obstacles, I’m really excited that our kids are getting to play,” Parrish said. “For a lot of these guys, soccer is what they look forward to the most at school. Soccer is how they express themselves.”