A Santa Claus to many, loved ones mourn Keith Urey 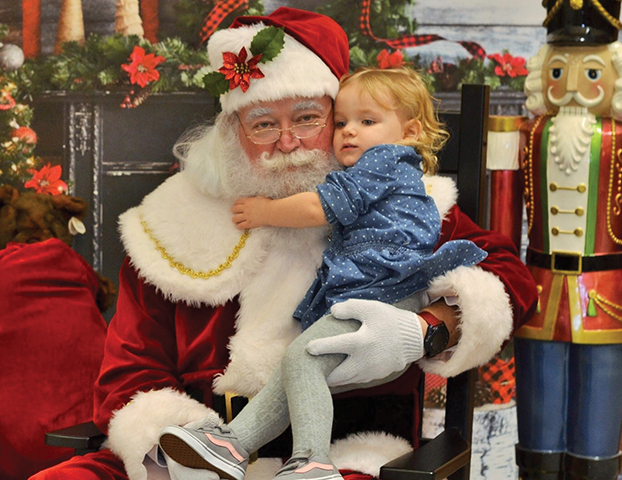 Keith Urey, who was Santa Claus to many in Kannapolis and China Grove, was known for his patience with children. Photo submitted.

CHINA GROVE — For most of her life, Laureen Hunter didn’t care too much for Christmas.

Instead of being the happiest time of the year, it was for her a time of sadness. Then she met Keith Urey.

Hunter, who was born in Scotland, moved to North Carolina in 1968. She met Keith Urey a few years ago on a trip sponsored by the city of Kannapolis to visit Grandfather Mountain. Hunter and Keith, who was driving the bus on the trip, started chatting during the outing. They immediately clicked.

Not long after, the couple started traveling all over the country — from Wisconsin to Washington D.C.

“We just got closer and closer and he became my soulmate,” Hunter said. “We could go in a store and find something amusing. I’ve never experienced anything like it. Keith brought it all to life for me.”

In December, Keith Urey asked Hunter to be a part of one of his most cherished past times — playing Santa Claus.

“I felt it was a great honor,” Hunter said. “When he first asked me to do it, I thought, ‘I don’t know if I can do this or not.’ I didn’t have a big role, I was just Mrs. Claus hanging in the background making sure Santa was perfect for everybody to see, but it was a thrill.”

For as long as anyone can remember, Keith Urey dressed up like Saint Nick every Christmas to bring happiness to children during the holidays. Last year was no different. While wearing a mask and keeping his distance, Keith Urey still played Santa for thousands of kids in Kannapolis and China Grove.

Less than a month after Christmas, Keith Urey died of a major heart attack at the age of 68 on Jan. 16. He was also battling COVID-19 during the time of his death. He died at Atrium Health Cabarrus, not far from where he was born in 1952 to James Grex Urey and Billie Lou McWethy. Keith Urey was a father to James Urey and the stepfather to two daughters.

To James Urey, his father will forever be known as patient.

“The main thing I can remember is him having the patience of no one else,” James Urey said. “He was just so patient. Being an older father, you have more patience for your son, or your children. He was always thinking ahead of what he could do for me.”

Because of a divorce, Keith Urey raised James largely as a single parent. Despite the challenges that came with that, the son said his father never let him go without and always tried to make life entertaining and joyous.

“We didn’t have a whole lot of money, but he always seemed to find something to do,” James said. “There was always something to have fun doing.” 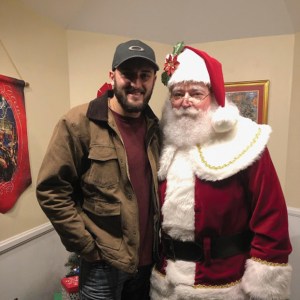 James Urey stands with his father Keith Urey, who was well-known in Kannapolis and China Grove for playing Santa Claus. Photo submitted.

James Urey grew up riding behind his father on the back of a motorcycle. When Keith Urey went to bike rallies or on long road trips, he always brought his son along for the adventure.

“I got a little vest growing up and whenever we’d go different places, I’d always get some kind of pin or something and I’d put it on the vest,” James said. “That vest probably weighed more than me growing up. It was heavy.”

Every year, the father and son duo rode a motorcycle to the Nazareth Child and Family Connection Home, bringing gifts on a bike instead of a sleigh.

“We’d take toys for tots for them and they let the children ride on the back of the bike,” James Urey said. “A lot of the kids there hadn’t seen a bike, let alone ride one. It was just cool.”

The same virtues that made Keith Urey a good father to James — generosity, kindness, patience — were the same attributes that made him a beloved Santa Claus. 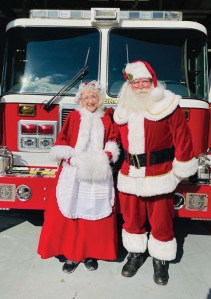 Even when he wasn’t cloaked in his red suit, Keith — who wore his perfectly coiffed white beard year round — was approached by children who wanted to take a picture with him or whisper their wishlist in his ear.

“Kids just seemed to gravitate toward him,” Hunter said.

Hunter said Keith Urey never turned down the chance to play Santa, not even when a child came up to during a meal and talked to him for several minutes.

“One time, he listened so long that his food got cold and the manager down at the steakhouse brought him a new plate of food,” Hunter said. “Keith was willing to give up his food just to listen to this child and hear what that child wanted for Christmas and this was the middle of the year. It happened all the time.”

With COVID-19 precautions in place, Keith Urey did everything he could to spread Christmas joy last year. He and Hunter even rode through China Grove on a firetruck.

“Since (the kids) couldn’t come see Santa, we tried to do the best we could to put him out there in the streets. I actually drove them around on top of our engine and we tried hitting every city street we had,” said Dustin Baker, China Grove’s assistant fire chief and Keith’s nephew. “It was a really good turnout. Kids were running for blocks to see him and just to wave.”

Baker said he also played Santa at the town’s Christmas in the Grove celebration the previous several years and that he always left people “happier than they were before they saw him.”

During his working life, Keith Urey worked as a Rowan County Sheriff’s deputy, was a welder and fabricator at Freightliner and drove a school bus for Rowan-Salisbury School System. In his retirement, Keith explored his passion for trains by managing the Rotary Express Train at the Village Park in Kannapolis.

“His other love was driving the train at the park,” Hunter said. “They have this small-scale train that people can ride on. He was the engineer. That was his baby. If it wasn’t Santa Claus, it was the train.”

James Urey, who runs a tile-installation company, said there are about 400 train cars at the house built by Keith’s parents in China Grove. James Urey is currently renovating the home and preparing to marry his fiancé.

“We basically gutted the house and are doing a total remodel inside and out,” he said. “We’re in the process of doing that and we’re planning on starting a family. We were hoping he would get to see the grandchildren.”

While James Urey mourns his father, Kannapolis and China Grove are mourning the loss of a community figure.

Editor’s note: The original version of this story incorrectly stated the name of Keith Urey’s son. The story has since been corrected to reflect the correct name.