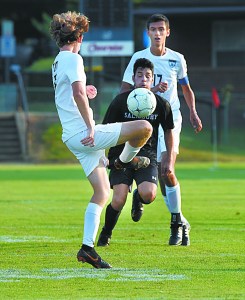 Salisbury won 1-0 at South Rowan on Monday in a designated non-conference match.

Colin Donaldson scored just five minutes into the match  for the Hornets (3-0) to provide the only  goal.

Senior center back Theo Oglesby was sent off for a tackle (he was deemed the last man in a goal scoring opportunity) with 31:20 minutes remaining in the first half, so the  Hornets played a man down for the last 71 minutes.

South controlled a large portion of the action, particularly in the second half, but could not find the frame with regularity.

Christopher Portillo battled through injury to be stellar in the midfield and Juan Garcia Cortez was outstanding as the most experienced defender.

Carlos Romero and Johnny Hernandez  scored for the Falcons, with John Ferguson and Salvador Bautista assisting.

Carson lost to Statesville 3-1 in NPC action on Monday.

Gabe Morriston scored for the Cougars, with Christian Kluttz getting the assist.

East Rowan lost to South Iredell 4-0 in NPC action on Monday. Gavin Gullett made 22 saves for the Mustangs.