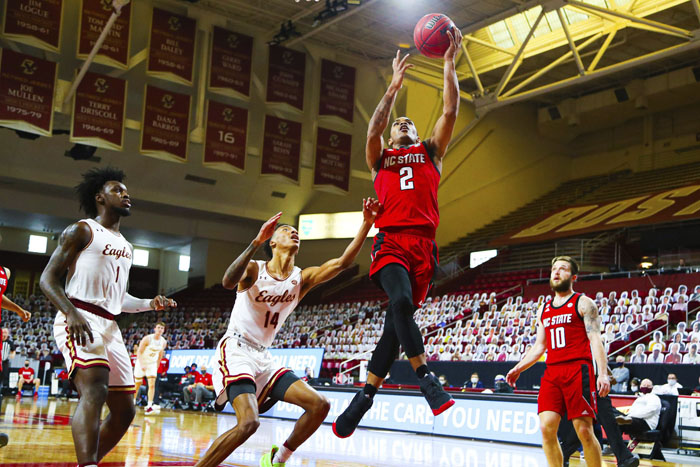 Shakeel Moore scored a career-high 19 points and added six rebounds on Saturday to lead North Carolina State to an 81-65 victory over a Boston College team coming off a three-week coronavirus shutdown with six scholarship players available.

Calling on five walk-ons and playing for the first time since Jan. 16, the Eagles scored the first two baskets of the game before giving up 37 of the next 40 points.

“These are hard times for everybody. Not just our team,” BC coach Jim Christian said. “It’s a wait and see approach to every game. Kids love to play basketball, so they were excited to play.”

Manny Bates and DJ Funderburk had 14 points and seven rebounds apiece for the Wolfpack (8-7, 4-6 Atlantic Coast Conference), who snapped a two-game losing streak and won for just the second time in eight games since a victory over BC on Dec. 30. Jay Heath scored 20 points and Steffon Mitchell scored 14 points with seven rebounds for Boston College (3-11, 1-7).

Five walk-ons — dubbed the Martians for the green jerseys they usually wear in practice — appeared in the game, with Andrew Kenny playing 18 minutes and hitting a pair of late 3-pointers.

Will Jackowitz had one rebound and a steal; Sam Holtze had a steal and an assist; Jon Noel had an assist, and Quinn Pemberton got in for six minutes.

“It was nice to see those guys get an opportunity to play,” Christian said. “We had some guys play, especially the guys who played at the end, who don’t get a lot of reps.”

After the BC football team made it until the final week of the season without its first positive test for COVID-19, the basketball programs haven’t been as successful. In addition to the three-week pause for the men’s team, the women went into their second shutdown on Saturday.

The Atlantic Coast Conference postponed BC’s next two women’s games after a positive test and contact tracing within the program. The Eagles already had four games postponed.

For now, BC is scheduled to return on Feb. 16 against Pittsburgh.

As Christian conducted his postgame conference call with reporters, CJ Felder was back on the court, shooting with usual starting guards Wynston Tabbs and Makai Ashton-Langford. All three wore masks.

N.C. State won the previous matchup with BC by three points.

This one was over early.

After taking a 5-0 lead, the Eagles gave up 11 points in a row and 37 of the next 40. They missed 12 straight shots over a span of more than nine minutes before Heath hit a 3-pointer with five minutes left in the half to make it 37-11.