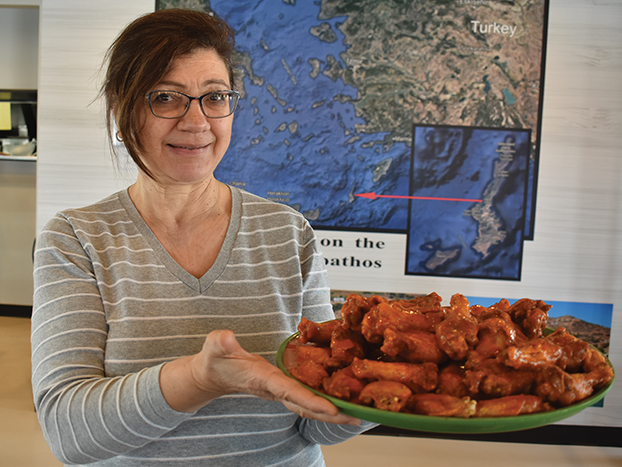 Sophia Talarantas, who runs Christo's with her sister Eugenia Piperis, holds a plate of the restaurant's wings. Ben Stansell/Salisbury Post

SALISBURY — While people gather around their TVs for the Super Bowl tonight, Sophia Talarantas and Eugenia Piperis will be preparing for their own big game.

Inside the newly renovated Christo’s restaurant on East Innes Street, the two sisters will pack endless Styrofoam to-go containers with thousands of chicken wings soon to be eaten by football fans as they watch America’s biggest game.

“Every year we try to make a count, but after a while you don’t even want to be counting,” Talarantas said. “It’s in the thousands, not talking five, not 10, not 20, we’re talking a lot of wings.”

Over the past 25 years, Christo’s has become the go-to spot for many locals to get their wing fix on Super Bowl Sunday.

Born in Greece, Talarantas and Piperis moved to New York City in 1968 and 1971, respectively, decades after their grandfather was the first in their family to arrive in the country.

After living in New York for several years, the sisters moved south together in search of a place with less crime to call home. After settling in Salisbury, Talarantas and Piperis purchased Christo’s restaurant in 1995, entering the restaurant business like many of their family members.

The sisters kept the restaurant’s name and much of the menu the same, but added their own signature buffalo sauce to the jumbo wings that have become a staple of the restaurant. The bright red sauce, similar to others that can be found coating flats and drumettes throughout the country, has its own herbaceous kick that has made it a customer favorite. 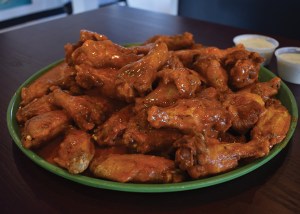 Christo’s serves everything from pizza to ribs, but the restaurant’s wings are the most popular item on the menu. Ben Stansell/Salisbury Post

The sauce-drenched wings, fried using a canola-oil blend, have become so popular that Talarantas said she’s even had customers ship them across the globe.

One night, Talarantas said a woman called in and ordered 100 wings and asked that they be split into four bags. Talarantas found the request unusual, until she found out why it had been made.

“When she came to pick it up, she gave me an explanation,” Talarantas said. “She said ‘I’m freezing the bags and I’m going to ship it overnight to Germany where my brother is at the naval base.’”

For many people in and around Salisbury, Christo’s wings have become synonymous with Super Bowl Sunday. In the early days of their tenure at the restaurant, Talarantas and Piperis allowed customers to place orders weeks in advance.

That soon led to major problems.

“There used to be fights breaking out years ago,” Talarantas said. “We had to get an off-duty cop to come and be a security guy. I remember once in the parking lot one girl bit another girl’s thigh. There were several fights of whose order is first, so we said no more tickets.”

As a result, the sisters implemented new ground rules for Super Bowl Sunday and have followed them strictly ever since. They no longer accept orders in the days leading up to the game. Instead, wings are sold on a first come first serve basis to those who visit the restaurant.

They’ve also tried to limit the quantities of order to batches of 50 or 100, making life easier for their cooks who work furiously throughout the day to meet demand. They’ll sell smaller batches, Piperis said, but only when they’re able to.

The rules have been generally accepted and followed by Christos’ customers. When someone calls days before Super Bowl Sunday asking to place an order, Talarantas knows they’re not a regular.

In the quarter-century since the sisters have been running Christo’s, they’ve cultivated a loyal following. With most of their extended family in New York, Greece or spread out across the country, Talarantas and Piperis said that they’ve come to see their customers as an adopted family.

“Very rarely does someone walk in and we haven’t seen them in here. It’s not like we depend on the highway or anything else,” Piperis said. “We depend on ordinary people who live in Salisbury and know us.” 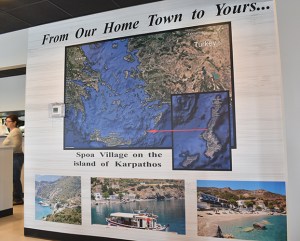 Sophia Talarantas and Eugenia Piperis take great pride in their Greek heritage. A map featuring their hometown has been printed on the way in the newly-renovated restaurant. Ben Stansell/Salisbury Post

The familiar faces who have eaten at Christo’s for decades have continued to support the restaurant during the COVID-19 pandemic.

“It’s been tough with the virus, but honestly, I think it would’ve been much worse if we didn’t have our loyal clients, our loyal customers,” Talarantas said. “Even when we’ve been closed (for renovations) they’ve been good.”

When the restaurant shut down dine-in operations in August to undergo a much-needed renovation, customers got used to walking through to pick up their orders to go. After being closed for about six months, Christo’s will welcome customers back for dine-in service on Tuesday.

Longtime customers will walk into a space that has been radically changed.

“I remember a couple times, people came in and they walked out because the building looked really run down,” Talarantas said. “They didn’t have faith in us because we didn’t look good. But now that the building is looking better, I hope we get the people passing by.”

Many of the people who will stop by to pick up wings today will have been there before, likely on the day of the Super Bowl last year.

Despite the pandemic, the sisters said they are expecting business to be as hectic as usual. When Talarantas pulls into the parking lot before 9 a.m. today (two hours prior to when Christo’s typically opens), she said that she anticipates a few customers will already be waiting for them to open.

The art of recovery: Kevin Kerr goes through rehab…