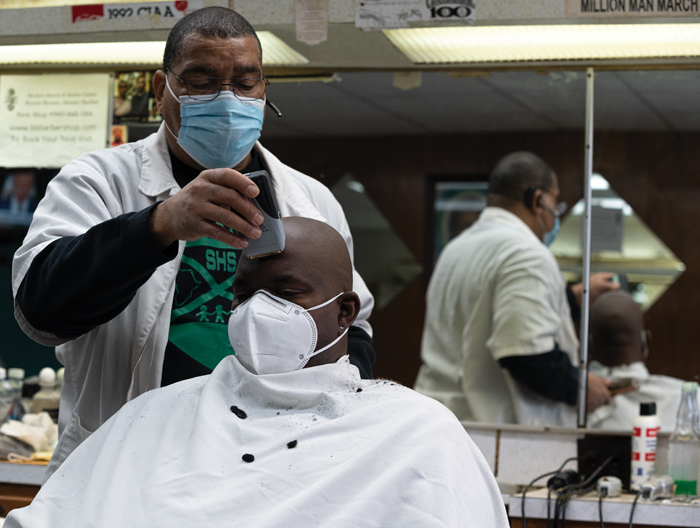 SALISBURY — If you ask Byron Brown to tell you about himself, he might start by talking about childhood interactions with Thomas Randall.

Randall was a father figure for Brown and his brother Philip, sparked their interest in being barbers and sent the pair to school in Raleigh. For years, Randall owned and operated a barber shop in the West End and did things big and small to give back to people. His mentorship and example, however, were most valuable for Brown.

“He gave me my start. He was a man of the community. He saw something in us and took a liking to us and wanted to help us grow,” Brown said Thursday as he put the finishing touches on a customer’s haircut.

Randall was born March 29, 1907, in Madison, Georgia, the foster son of Hercules and Sujette Smith. His parents died within a week of each other when he was 2. He moved to Salisbury at the age of 7 with his grandmother and spent any time he wasn’t in Salisbury schools at the barbershop. He graduated from Price High and attended Livingstone College as well as barber schools in Winston-Salem and Raleigh.

He became known in Salisbury for his charitable spirit. He was the hospital’s Sunday morning barber, giving a shave and a haircut for free.

“I feel that if the Lord blesses me and lets me shave folks and cut their hair on Monday, Tuesday, Wednesday, Thursday, Friday and Saturday for a living, then I can at least give part of Sunday to the same thing in the service of the Lord,” Randall told the Post in a 1959 story.

After cutting hair at the hospital in the morning, Randall went to service at Moore’s Chapel AME Zion Church and went back to the hospital if needed, Brown said.

He was a soft-spoken, easy-going man known to offer his help to anyone who needed it, said Wilson Cherry who grew up a short walk from Randall’s shop in the West End. If a child didn’t have money to pay for a haircut that day, that was OK. If 10 children came by selling something for a school fundraiser, he was likely to buy something from all of them, Cherry said.

“I have nothing but admiration for the man,” Cherry said.

He was a pillar of the community, Brown said.

Randall died Dec. 1, 1992, but his example molded future pillars of the community in Brown and his brother.

“I think Byron is a classic example of what a mentor or mentee is about,” Cherry said.

Every morning he’d walk to school and stop at local businesses on the way back home and earned some money doing small tasks like sweeping the floor or taking out the trash. The businesses in the West End were more plentiful then, and there was plenty of work to do, too. As he stood at the entrance to his barbershop last week, he easily recalled the Black-owned businesses that filled an area called The Block. Those included a funeral home, dry cleaning business, pool room, grocery store and restaurants. There was a movie theater, too.

Brown found himself drawn to Randall’s barbershop, which originally was on Horah Street, less than a block from where Brown’s shop is now. Randall rented the first shop from a church and built the current building on South Craige Street because he wanted to own his business. Brown recalled helping fill wagons with bricks and mixing mortar to build the current shop.

“Did I build Mr. Randall’s barbershop? That’s for you to decide,” Brown quipped.

Brown and brother Philip often did their homework in the back of the shop. Because their father died when they were young, Randall became a sort-of foster father. They could be found shining customers’ shoes as Randall was giving a haircut, swept the floors or washed windows — whatever it took. As children, the brothers made $2.50 per week helping Garland Gaither deliver the Salisbury Post — a job that Randall helped them secure.

“The community came to know us because we were always here,” Brown said as his stood in his barbershop.

Besides teaching them life lessons, Randall taught Brown and his brother the skills of the trade and, in 1980, sent them to Harris Barber College in Raleigh. They already knew how to cut hair after graduating from Salisbury High School, but needed to obtain the proper credentials. Immediately after finishing barber school, Brown returned to his hometown to work at Randall’s Modern Beauty and Barber Center. Randall continued to work at the shop before retiring and turning the business over to his protégés.

“Boys, I’m gonna leave it with you,” Brown recalled his mentor saying.

Randall came back to the barbershop from time to time after his retirement to get news on what was happening in town and to play checkers and backgammon, Brown said.

Today, friends and acquaintances pay the same compliments to Brown as the barber paid to his mentor. Randall taught him the value of things such as giving back to the community, Cherry said.

Brown was one of the first organizers of the city’s Martin Luther King Jr. parade and the movement to name a street in town for the civil rights icon. He’s an active member of his church, Moore’s Chapel. As a member of the Men’s Crusaders of Salisbury, he put together events for sickle cell anemia. He’s a member of West End Pride and Western Star Lodge No. 9. In 1992, he received the city’s Martin Luther King. Jr Humanitarian Award.

Brown isn’t keen on talking about the ways he’s helped the city. He is quicker to tell the story of Randall. And for an interview last week, he came prepared with a two-page, handwritten write-up from a former teacher about his brother, Philip, who is a resident of Accordius Health on Statesville Boulevard after an illness in 2012.

“(Philip) was a participant in activities in the community, always keeping abreast of what was going on and how he could contribute, not out front, but in the background,” the handwritten note stated.

Others are happy to talk about Brown instead.

“He’s had his influences in ways that people don’t know and understand,” says friend and Salisbury resident Ada Fisher, who notes that he’s a good barber, too.

The things he’s done for Salisbury are “incalculable,” she said.

That’s meant volunteering to help the sick and elderly, lobbying for recreational activities at Kelsey Scott Park and helping kids in the neighborhood. For parents and their children, Fisher said, Brown is one of the only barbers she knows who is willing to cut hair on credit. For Livingstone College students unable to afford a haircut, Brown has been known to do it at no charge, said President Jimmy Jenkins.

Brown has also met regularly with college officials about improving the quality of life in the community.

“I think it’s important for a person to have that kind of attitude about maintaining a safe and productive community,” Jenkins said. “It is certainly comforting to me as the president to know that our students, who come from all over the nation, have someone like that in the community.”

Salisbury resident, retired educator and historian Raemi Evans knew Brown when he was a student at Salisbury High School.

Scouting for Food tradition continues with thousands of pounds…