The art of recovery: Kevin Kerr goes through rehab after severe stroke 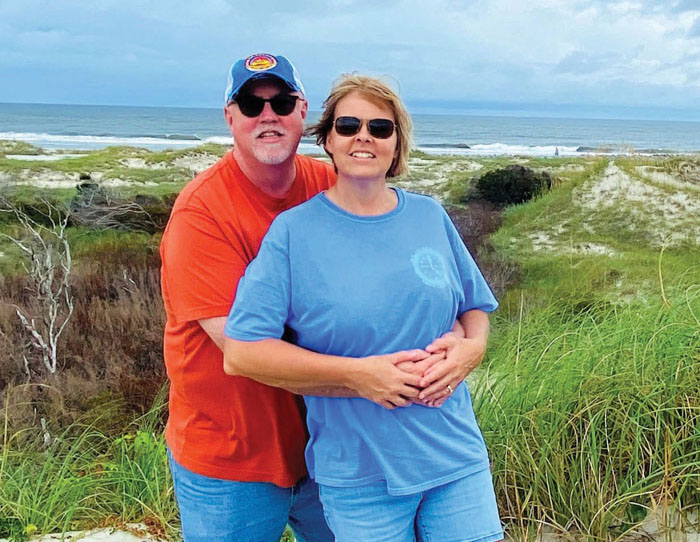 This winter, Kevin Kerr discovered a talent he didn’t know he had: painting. Unfortunately, it took a severe stroke and a stint in rehab to uncover it.

On Oct. 24, 2020, Kerr awoke in the middle of the night, unable to move. He’d been battling bouts of vertigo for months, but didn’t think much of it as he’d had it sporadically for years.

The attacks — which included dizziness, nausea and vomiting — grew more frequent, and Kerr realized only afterward they had been transient ischemic attacks. He spent two days in ICU at Baptist Hospital and three days in a regular room before going to the Sticht Center in Winston-Salem, part of Baptist, for nine days of rehabilitation.

As a kid, Kerr, now 55, loved 4-H summer camp. So he decided to keep a journal of sorts on his Facebook page about “Stroke Camp.” His friends loved it, and it made them laugh. Clearly, he had not lost his sense of humor.

“I’m not sure how much fun I’ll have because everyone seems so serious,” he wrote on Oct. 29. “Luke is my activities director and today he had me do such fun things like walking 100 feet with a walker, getting in and out of bed, walking on padded surfaces, walking up and down steps, and getting in and out of a car. I sure hope archery or arts and crafts is soon. I want to build a bird house or a knife block.”

He later wrote a serious update on Nov. 13, three weeks after his stroke. 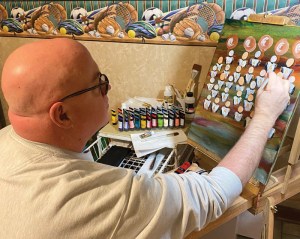 Kerr puts the finishing touches on a painting of the ASU marching band, directed by the late Joe Phelps.

Friends read his updates, and commented, offering love and support and prayers.

Then the bird houses started to arrive.

In rehab, Kerr had joked that he never got to paint a bird house, so several friends sent kits once he got home.

“I started putting them together and painting them, and gave some away, and I thought, this is fun,” Kerr says. “I remembered we had bought our daughter some painting supplies, so I got those out of the closet. The first thing I painted was the Hatteras Lighthouse, and it took off from there.”

And people started paying for his artwork. He uses the donations, as he calls them, to replenish his art supplies. He uses acrylic paint as his medium.

Kerr had taken art in high school, and took art as part of his major in college. He’s a 1983 graduate of South Rowan High School, and a 1987 graduate of Appalachian State University with a degree in communications media. But he hadn’t picked up a paint brush since.

“I’m surprisingly good at it,” he says.

And he needed something to do.

“I was bored,” he admits. “There were only so many Hallmark movies I could stand. It wasn’t helping the healing process to be a coach potato.”

Kerr lives in Advance with his wife Tonya. They have two children, Austin, 25, a firefighter and the owner of Fellowship Charters at Ocean Isle Beach, and Abby, 22, a 2020 graduate of Western Carolina University who now lives in Sylva.

His wife is an AIG specialist at North Davie Middle School. Tonya Kerr says she wouldn’t wish this harrowing experience on anyone.

“I was just blown away,” she says. “It was just beautiful. It’s just been a way for him to get his mind off things and relax. He’s been thinking about what would put smiles on people’s faces. The ideas just come to him. He’s always had a creative spirit.”

Kerr says his grandmother, Treva Iddings, painted and did other “crafty things.” And his older brother, Sam Morgan of Spencer, is a longtime commercial artist.

“I was always in awe of his talent and never knew I could possess even a fraction of it,” he says.

Kerr finished up physical therapy and occupational therapy in January. He’s still working on vision therapy, but he may never recover from the profound hearing loss he experienced in his left ear. He’ll go for a reevaluation with PT and OT later this month, and hopes to return to work in early April. He’s a national director of sales for Taylor Corporation.

Kerr started out painting in the dining room, but now has moved his studio down to his son’s old bedroom, where the light is better. So he’s pretty much taken over the whole downstairs, which also includes his “man cave.”

A longtime music lover, Kerr set about recreating his childhood album collection — and things kinda got out of control. He also has music memorabilia of his favorite bands — KISS and the Avett Brothers among them — as well as other memorabilia such as the wildly popular poster of Farrah Fawcett.

There’s a lot to see in the man cave.

Music has even made its way into Kerr’s artwork.

He played saxophone all through junior high, high school and college, and he’s made several saxophone paintings which have been snapped up by fellow players. Just this week, he completed a painting of the ASU band, led by Joe Phelps in his bright yellow sports coat.

“I posted it on the Appalachian State Marching Band Alumni page,” he says. “I’ve already had people asking me if I’d sell prints of it. I’m shocked.”

He laughs, and it feels good to laugh.