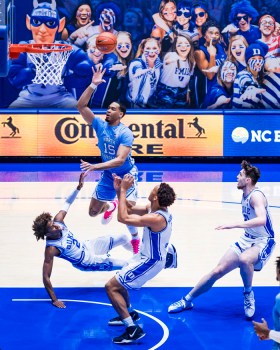 UNC’s Garrison Brooks gets off a shot as Duke’s DJ Steward (2) goes down Saturday night with only images of the Cameron Crazies allowed in the arena. Photo courtesy of ACC

Junior Leaky Black hit two clinching free throws with 7.2 seconds left to make it a two-possession game for the Tar Heels (12-6, 7-4 Atlantic Coast Conference), who ended a three-game losing streak against the Blue Devils (7-7, 5-5) despite blowing nearly all of a 12-point second-half lead.

The longtime fierce rivalry between nearby neighbors had a very different feel this year.

The teams typically among the nation’s elite entered this matchup with both unranked for the first time since February 1960. There was also the absence of Duke’s famously rowdy fans in Cameron Indoor Stadium.

The Tar Heels shot 53% and hit 10 of 15 3-pointers after shooting just 30% from behind the arc entering the game, including four each from Love and fellow freshman Kerwin Walton. The Tar Heels also had 28 points off turnovers and six players in double figures, overcoming a 13-for-22 showing at the foul line.

Freshman Jeremy Roach scored 16 points for Duke, which shot 54% and made 11 of 25 3-pointers. But Matthew Hurt, who entered the game as the ACC’s No. 2 scorer at 18.9 points per game, finished with just seven before fouling out.

DJ Steward’s layup brought the Blue Devils to within 88-87, with Black answering by hitting 1 of 2 free throws with 14.6 seconds left. Wendell Moore Jr. (15 points) had a chance to tie, but he drove to the paint and wasn’t able to get off a shot before being whistled for a travel to set up Black’s clinching free throws.

Black, Garrison Brooks and Walton each scored 12 for the Tar Heels. Armando Bacot chipped in 16 points and Day’Ron Sharpe 11.

The Tar Heels will play Miami on Monday in Chapel Hill. Duke plays host to Notre Dame on Tuesday.