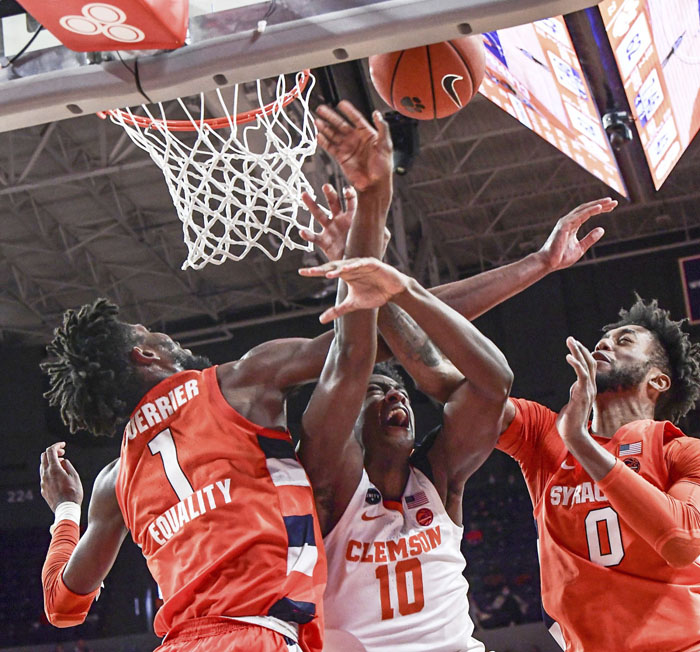 CORAL GABLES, Fla. — Virginia Tech had to go to overtime to avoid a losing streak.

CLEMSON, S.C. (AP) — Nick Honor drained four straight 3-pointers early in the game, Clemson led by 20 at halftime and emptied the bench in the second half of the romp.

Ten of 11 Tigers (12-5, 6-5 Atlantic Coast Conference) scored with Aamir Simms leading the way with 18 points on 7-of-9 shooting along with 11 rebounds for his second double-double of the season, seventh career. Honor added 15, all from beyond the arc, and Clyde Trapp had a career-high 11 assists with eight boards.

ATLANTA (AP) — Michael Devoe made back-to-back shots in the final 2:06 and scored 19 points to help Georgia Tech rally from a 17-point deficit for an 82-80 win over Notre Dame on Saturday night.

Devoe scored 14 points and made all five of his field goal attempts in the second half. His short jumper gave the Yellow Jackets (9-6, 5-4 ACC) a one-point lead with 2:06 left and followed with another jumper for Georgia Tech’s largest lead of the game at 82-79 with 1:25 left.

Georgia Tech opened the second half with a 14-4 run and completely erased the deficit on Alvarado’s layup that put the Yellow Jackets in front 65-64 with 9:24 left in the game.

The Blue Raiders (5-11, 3-7 Conference USA) have now won two in a row after a string of six straight losses.

Jayden Gardner had 23 points and nine rebounds for the Pirates (8-7, 2-7), who were coming off an upset of No. 5 Houston on Wednesday night. It was their first win over a ranked team in almost two decades and the highest-ranked team they ever beat.

CHARLESTON, S.C. (AP) — Hayden Brown scored 21 points and grabbed 15 rebounds for his ninth double-double as The Citadel beat the Catamounts.

Western Carolina edged The Citadel 76-75 on Monday, blocking a shot at the buzzer.