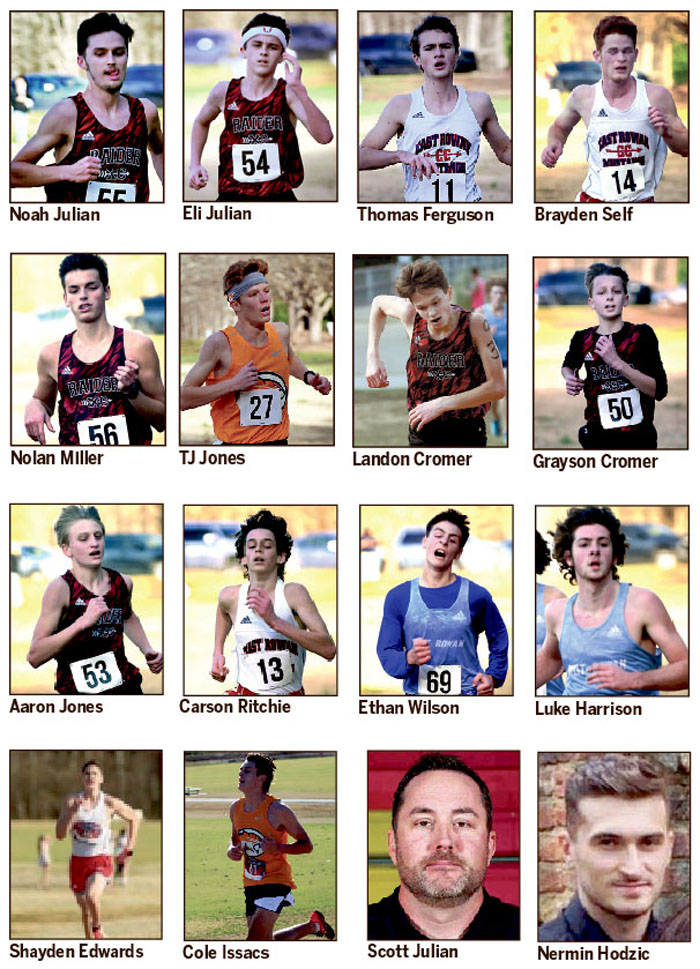 SALISBURY —South Rowan senior Noah Julian has been the smiling, polite, yet grimly determined face of cross country in Rowan County for a long time.

A lot of people have watched him grow up tall and swift on and off the trails.

He’s been durable, one of the most consistent and one of the best. He never let anyone down. He’s someone everyone could be proud of whether their allegiance was to South Rowan or not.

During the course of a terrific career, Julian led South to three county championships and to back-to-back titles in the 10-team Central Carolina Conference. Individually, he set the pace in the CCC meet three times and in the county meet three times.

He ran 16:39 in this season’s 2A state event and is the obvious choice as the Post’s Runner of the Year for the third straight time.

But even Julian was challenged to the limit by a 2020-21 cross county season that was the longest in memory for any high school sport.

Runners started preparing for the 2020 season in the summer months. There were snowflakes falling on them by the time they reached the regionals. Some runners finished the season on Jan. 22, 2021, at Kernersville’s Ivey Redmon Park in the NCHSAA State Championships.

Julian took the initiative to get competition started in early September, organizing a meet on a newly constructed course for Rowan teens long before they were allowed to wear their school colors and compete officially as teammates. That didn’t happen until November.

While Julian did his best to get this season started, he was also there at the very end, wearing the red and black and leading South Rowan to a fifth-place finish in 2A.

When a traditional public school that draws students from two small towns with a combined population of 7,000 finishes fifth in the state in anything, it’s newsworthy.

“At the state level, we’re competing against some really massive programs,” Julian said. “We’re not a charter school and we’re not from a population center. We were a team of seven guys, so I think we competed as well as we possibly could have at the state level. I didn’t run any crazy times this season, but considering the conditions, I was very happy with how I competed. More than anything, I was proud of what we were able to accomplish as a program. Not only our boys team, but our girls team. They finished their season in the state meet, too. It was a fantastic season.”

Scott Julian performs triple duty, as South’s boys head coach and also as the father of Noah Julian and freshman Eli Julian, the second-best runner not only for South’s Raiders, but for all of Rowan County. He clocked 16:57 in the state meet.

“This season is very hard to put into words, hard to sum it up, because was a six-month season,” Scott said. “Cross country might be the hardest sport to have a six-month season. It’s not a sport where you can take two weeks off and then come back to it. It’s a sport where you can’t stop for long if you’re going to stay at a high level. You have to always keep pushing, pushing, pushing, almost every day. Fortunately, we were blessed to have a great crew of hard-working young people. This was the most difficult season I’ve ever experienced, but it also was the most rewarding because we accomplished so many of our goals.”

Obstacles in this unique season?

Runners starting in waves rather than having a uniform start for everyone. Masks worn by the administrators and coaches and masks worn by the competitors before and after race. Unprecedented weather conditions, with the important meets being conducted in the chill of December and January, rather than October and early November. This season started at a later date than the one on which the 2019 season concluded.

“We were fighting through a whole lot of things,” Scott said. “Fighting times and fighting conditions.”

The Julians, like a lot of other coaches and runners, spent the summer  hoping and praying there would be any kind of season at all. There always was fear that tomorrow might bring the news that high school sports were canceled.

“I’m sure there were runners all over the country who wanted to give up, to just tank it and not put in the work because there was so much uncertainty about this season,” Noah said.

The spur for Noah to keep driving himself was his brother, Eli.

“Eli is going to be such a great high school runner,” Noah said. “He was on my tail a good bit in a lot of the races. That helped push me.”

There’s some sibling rivalry there, but it’s all positive.

“Rivalry, yes, but there’s respect and Noah and Eli get along,” Scott said. “It helped Noah to have his little brother chasing him. Eli pushed him hard, but Noah never let him get him. And it helped Eli’s development to have a runner like Noah to chase.”

While COVID wiped out track and field last spring, including the Rowan County Championships, both Julians plan to be in action this spring, with Eli in the longer events and Noah, with his long legs, straight-line speed and exceptional endurance, capable of excelling in events as short as the 800 and 400.

Scott Julian is one of the Post’s coaches of the year for leading South to two major championships, a second-place regional finish and to that great showing in the state.

A number of county runners turned in notable individual seasons.

East Rowan junior Thomas Ferguson came up big in the championship meets for Rowan County and for the NPC. He placed third in both.

East freshman Shayden Edwards had an amazing season. At the county meet in early December, he placed 14th, but he got a lot faster. He ran 17:34 for second place in the NPC Championships and clocked 17:31 to lead Rowan runners in the 3A West Regional in Hendersonville.

Carson senior Cole Issacs was only 18th in the county meet, but he ran 90 seconds faster in the NPC meet to pace Carson and to place sixth individually.

The top dozen finishers in the county meet are automatically all-county. Edwards and Issacs have been added to that list for the Post’s salute to a COVID-condensed season.