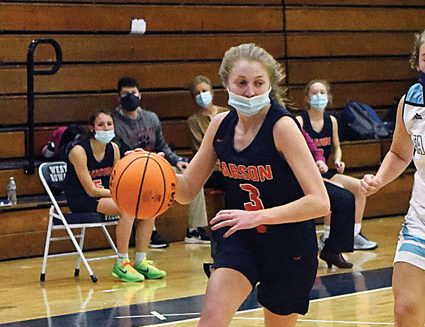 Wayne Hinshaw/For the Salisbury Post Before Tuesday’s game, Colbie Perry said, ‘The only advice I got from my dad was just to go out and play like it was any other game.’

GRANITE QUARRY —  Brian Perry stood in the doorway of the gym at East Rowan on Tuesday, next to Rick Roseman, the man who coached him in his playing days at East in the late 1980s and early 1990s.

Perry has been the boys basketball coach at Carson since the school opened in 2006. His daughter, Colbie, was a toddler then.

Time flies. Now Colbie is a senior at Carson.

“I’m thinking there’s a chance Colbie might get it in the second half,” Brian said. “She’s averaging about 14, but she can get hot. I was thinking it would be a pretty neat thing for her to do it at East in the same gym where I played.”

Brian and Coach Roseman thought back to Jan. 25, 1991. A.L. Brown, led by Shrine Bowl quarterback and super-athlete Mo Blakeney, was in the house at East. Brian only needed five points for the milestone and he got his 1,000th point in the first quarter. He was the first to score 1,000 in program history and did it in three seasons. They stopped the game long enough to give Brian a commemorative ball. He handed it off to his mother in the bleachers. She had been battling cancer.

East was good in 1991, but almost everyone had plenty of excellent players in those days.  East had two of the best in program history in Perry and Thad Sprinkle and still went 9-15. It was a battle every night.

Lex Graham’s A.L. Brown team already had lost three overtime games by the time the Wonders made the trip to East. The Mustangs and Wonders went two overtimes. Perry could really sky and he was 6-foot-3, but Dennis Gabriel blocked his jumper that could have won the game at the end of regulation. A.L. Brown finally seized the game, putting a damper on Perry’s 1000-point celebration. He was glad he got to the milestone, was honored to be the first for East’s boys, but losing took most of the air out of it.

Warming up for her game against the Mustangs, Colbie was calm, no nerves at all. Since she signed with Converse College in November, there hasn’t been nearly as much pressure on her. She’s shooting the ball confidently, better than she ever has. She’s just letting it go.

“The only advice I got from my dad was just to go out and play like it was any other game, to play like I always do,” Colbie said. “I was anxious and excited to get out there, but not nervous. My teammates are my best friends and we’ve got a great team. The seniors —we’ve been playing together since we were little kids. There wasn’t anything to be worried about.”

One of those seniors is Colbie’s first cousin — Carleigh Perry.

Colbie’s mom, Lisa, thought it would be nice for Colbie to reach the milestone at home when Statesville visited Carson on Friday, but Colbie has learned not to postpone anything.

“We’re in a season where they could announce tomorrow that everything is canceled,” Colbie said. “I didn’t want to put it off if I didn’t have to. You never know.”

There’s almost always anxiety associated with scoring 1,000 points. It’s been a magical figure for decades. The rim seems to shrink at about 980. At 990, girls who shoot 80 percent from the foul line start clanging free throws. At 995, girls who never miss layups start shooting airballs from 3 feet.

But Colbie was about to crush 1,000-point anxiety like no one ever has.

Stouder was a really good player on exceptional squads at East around the turn of the century. In her playing days, she was a combination of Carson’s Lani Isley and Ellie Wilhelm. She was a pass-first point guard, but she could score if she needed to. She helped a couple of teammates soar well past 1,000 points with her pinpoint passes, but she finished with 709 points for her four-year career. So she appreciates how difficult a journey it is to get to 1,000.

“It’s such a special milestone,” Stouder said. “Always has been. And maybe this year, in this shortened season, it’s even more special for one of our girls to do it.”

Brian could hardly believe what his eyes were seeing once the game started. Colbie made five 3-pointers in six attempts in a matter of minutes.

“Plus a left-handed layup,” Colbie said with a laugh. “It was crazy. I wasn’t expecting anything like that.”

“She went nuts,” Brian said. “She was amazing.”

Colbie had the 17 points she needed before the end of the first quarter. She was on pace for 68.

“First thing I did when I got it was to go hug my dad, and he was standing with Mr. Roseman, who had coached him at East,” Colbie said. “I could see my dad had tears in his eyes. That’s the first time I’ve ever seen that.”

Carson won 73-29. Colbie cooled off after that torrid first quarter, finishing with six 3-pointers and 22 points. That still was a career high for her. She scored one more point than her father did on the night he reached 1,000.

“A pretty cool thing for her to do it in the same gym as me,” Brian said. “Thirty years later.”

Colbie has been a unique player among the 1,000-point scorers in county history.

As a freshman, she scored only 40 points that didn’t come on 3-pointers. As a sophomore, she drilled 85 3s, but she slumped a little as a junior from long range and had a mangled hand by the end of the season..

This season she’s shooting 44 percent on 3s, and that will work in any league and at any level. That produces the same number of points as shooting 66 percent on 2-pointers.

“She put in so much work in the off-season,” Stouder said. “She’s having her strongest season. It’s always good when you see that kind of hard work pay off.”

Colbie said Converse was “blown away” by her 17 points in a quarter and contacted her to congratulate her.

The team presented her with a commemorative ball prior to Friday’s home game.

Colbie’s goal now is to continue to help the Cougars even on those nights even when her 3-pointers aren’t falling.

“Sometimes, people see me just as a shooter,” she said. “But I work hard on my defense and I’m driving more, trying to mix things up offensively.”

She is a long 5-foot-8 and had six steals against East. Carson is big on tracking deflections. Colbie leads the team in that stat.

The Cougars are 10-0, with 10 one-sided wins, so there’s a lot to look forward to in the playoffs.

Whatever happens, Colbie and her family will have at least one beautiful memory.

“It was a great night for all of us,” Stouder said. “To see a senior have a quarter like that was really special.”