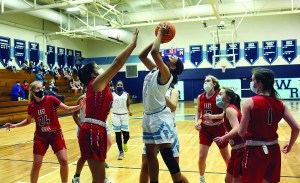 West’s Lauren Arnold in action vs. East Rowan . Photo by Wayne Hinshaw, for the Salisbury Post

OLIN — Life on the road can be tough.

North Iredell, which was idled by COVID for a couple of weeks, won for the second time and improved to 2-4 in the North Piedmont Conference.

Skylin Guill was the big problem for the Falcons. The junior guard scored 24 points. She scored 11 in Mount Ulla.

Jewel Allen, a 6-foot sophomore center, scored 15 on Friday. She was held to seven in the game in Mount Ulla.

West’s youngsters have been balanced all season, but they didn’t have that balance in this one. Lauren Arnold scored 19, but she was the only Falcon in double figures.

De’Mya Phifer was next with nine points.

Makaylah Tenor made two 3-pointers in the second quarter.

It was 26-all at halftime and was close all the way.

West plays at Carson and hosts Statesville to finish the regular season.