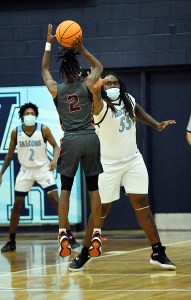 CHINA GROVE — Carson’s boys basketball team got its first win since opening night on Friday when it upset Statesville 59-58.

“We needed it,” Carson head coach Brian Perry said. “Happy for the guys. We’ve had a chance to get one a few times, but this is the first time in a while we’ve been able to finish.”

AJ Merriman scored a career-high 24 points to lead the Cougars.

“AJ did a great job of attacking and getting to the basket,” Perry said.

With Carson leading 55-50 with about a minute and a half to go, the Cougars had a disastrous play. Statesville got a steal and a transition 3-pointer and Merriman went down on the play with a sprained ankle.

Statesville had a chance to tie, but missed and Jay Howard grabbed a big defensive rebound for the Cougars and calmly made two free throws with 1:26 remaining.

With Carson leading by two with 10.3 seconds left, Emory Taylor went to the line and made two clutch free throws to seal the victory. Statesville made a 3-pointer in the closing seconds, but the Cougars didn’t have to inbound the ball and time expired.

“We made plenty of mistakes down the stretch, but the difference tonight was we got some big stops and Howard got some big boards in traffic,” Perry said. “And this time, we made our free throws. We’ve struggled from the line at times, but tonight two sophomores stepped up there and swished some big ones.”

TJ Miller scored 25 to lead the Greyhounds. Chris Brown had 13.

“Statesville may not be as good as they have been, but they’ve still got great athletes and Coach (Sonny) Schofield does a heck of a job with them,” Perry said. “It’s a really good win for us.”