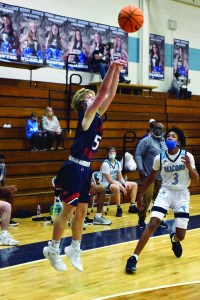 The 45 points were a season-low for the Mustangs, who beat South Iredell 62-53 in Granite Quarry.

Dylan Valley led East with 12 points. He was 3-for-6 on 3-pointers. David Jordan scored 11. Jordan and Aiden Schenck made one 3-pointer each.

East has road games remaining at Statesville, which was upset by Carson on Friday and at North Iredell, which is tied for first with West Rowan.