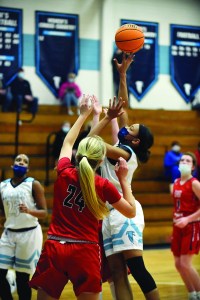 TROUTMAN — East Rowan’s girls basketball team cut a 16-point deficit down to a single point in the fourth quarter, but South Iredell held on for a 53-45 North Piedmont Conference victory.

“We had it down to one with a couple of minutes left and had some good looks,” East head coach Kevin Holland said. “The shots didn’t fall at the end.”

“Hannah broke out tonight,” Holland said. “We see it every day in practice, so it was good for her to have a big game.”

East had been blown out by Carson in its previous outing and didn’t have a good second half.

“I was proud of how we responded tonight,” Holland said. “It was a hard-fought game.”

It’s been such a long time: Blue Devils, Tar…