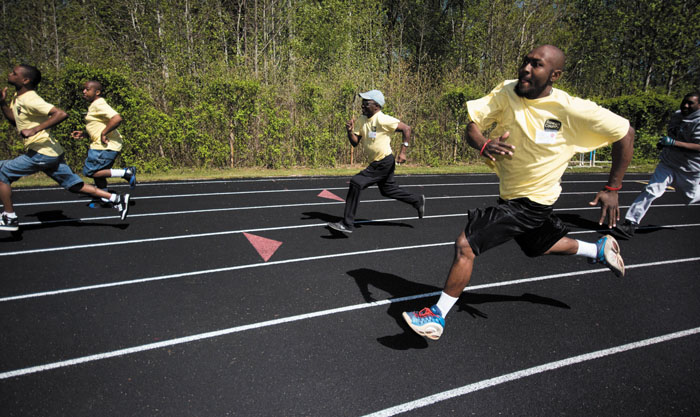 SALISBURY — Becoming the local coordinator for Rowan County Special Olympics is the continued realization of a lifelong dream for Edward Hailey.

“I was born with a disability myself, so for my career path, I always wanted to serve other individuals with disabilities and that has kindly led my way,” said Hailey, who also serves as the therapeutic recreation supervisor for Rowan County. “This is something I enjoy.”

Hailey was born with amniotic band syndrome and has a prosthetic foot.

“I don’t let anything stop me,” said Hailey, who is also a volunteer fireman. “That’s my big thing is keeping at it.”

Hailey has a degree in recreation therapy from Western Carolina University and became the therapeutic recreation supervisor for Rowan County in 2014. Along with providing recreational opportunities to people of all ability levels, Hailey has been responsible for overseeing the Salisbury Rowan Senior Games and SilverArts.

Hailey has also been a member of the steering committee for Rowan County Special Olympics, which has long been run by the YMCA. Due to staffing and funding concerns, managing Special Olympics became difficult for the organization.

Seeing that the program might be in danger, Hailey stepped in.

“We were already working with the YMCA, so our supervisor Edward Hailey came to me and asked if we could take on this responsibility and I told him that would be something he has to look at because we can’t provide any additional funding toward that program,” said Rowan County Parks and Recreation Director Don Bringle said. “We can’t provide any additional staffing. He felt that because of the staffing he had in place and the fact that they’ve been acting in this, it would not be a problem.”

That led to a recommendation, approved this week, that Hailey would be named the local program coordinator, a voluntary position. The YMCA will remain a Special Olympics partner and will continue to be involved in the planning and programming of events, Bringle said.

Hailey takes over as Special Olympics supervisor as the organization attempts to navigate the COVID-19 pandemic and figure out ways to best serve over 400 athletes in Rowan County.

Hailey said that the Special Olympics was about a month into its ever-popular bowling season in March when the coronavirus pandemic brought everything to a standstill. From spring until late summer, there was little to no activity. In the fall, the Special Olympics of North Carolina implemented the Partner Up, Power Up Program, where an athlete is partnered with a mentor and they separately but simultaneously complete daily exercises and activities and meet via Zoom on a weekly basis.

Hailey, who partnered up with a local athlete for the 10-week program, praised it.

“It’s a great opportunity to keep athletes active and healthy and engaged in Special Olympics,” Hailey said. “It’s a great program to keep us going sort of through the pandemic. The collaboration keeps us together as a group.”

Hailey said that more than 300 athletes have signed up to participate when it returns in the spring.

In addition to the Partner Up Power Up program, Special Olympics of North Carolina transitioned to a virtual format for its largest fundraiser of the year — the Polar Plunge. Under non-pandemic circumstances, fearless volunteers would come together and run into the frigid waters of High Rock Lake to raise money for Special Olympics.

This year, people are encouraged to find creative ways to douse themselves with freezing cold water from the safety of their homes.

“Individuals are encouraged to raise money through the months of January and February and if you raise $50, you’re eligible to do a virtual plunge,” Hailey said. “The state says you can plunge into a pool, an ice bath, run through sprinklers, super soakers, anyway to get wet.”

Videos of the plunges can be submitted to the Special Olympics of North Carolina using the hashtag #findyourfreeze on Twitter or by email at sdoggett@sonc.net. The most creative plunges will be packaged in a highlight video.

Hailey said the proceeds from the Polar Plunge make up the bulk of Rowan County Special Olympics’ budget.

“We use the Polar Plunge fundraiser to finance basically the entire year for our program,” Hailey said. “We try to set a goal of about five or six thousand dollars. Some years we’ve done much better. It is a very important fundraiser because it covers pretty much all of our costs.”

As the coordinator for Rowan County Special Olympics, Hailey said he wants to add more sports to its offerings and would like to increase participation.

On the therapeutic sports front, Hailey said that the county is hoping to host a mix of in-person and virtual events later this year.