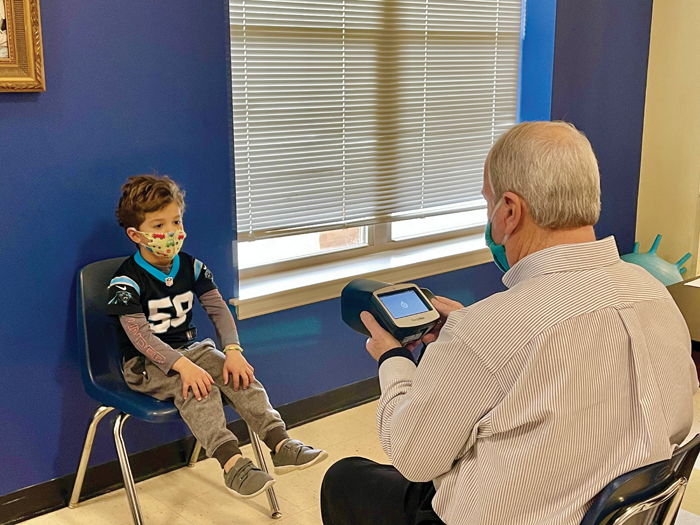 Photo submitted - Miller McIltrot gets an eye screening by a Lions Club member on Tuesday at Sacred Heart Catholic School.

SALISBURY – This week, Sacred Heart Catholic School has been celebrating everything.

Catholic Schools Week is a tradition for denomination-affiliated schools across the country, and this school year is no exception. Principal Tyler Kulp said the school recognizes different people every day during the celebration. Tuesday, for example, was all about the students. So, there was no homework.

Kulp said this is an important time of year for private schools because enrollment picks up. The week before was National School Choice Week. And on Wednesday the school was offering tours.

The school has celebrated the nation and vocations. On Friday, it will recognize its faculty, staff and volunteers. There are themed spirit days such as pajama day. The week also brings in community partners. Salisbury Mayor Karen Alexander visited and spoke to students on Monday. On Tuesday, the local Lions Club came to the school to perform vision checks on students.

Morning prayers focused on the groups the school was celebrating that day.

The Lions Club has partnered with the school for years, noting in the past some students have not been able to get their vision checked. A lot of families like to get it checked through the school year-to-year.

Teachers often identify minor vision problems in their students. More than 100 students are screened at the school each year, though some already have correction or vision care and do not need the checks.

The partnership benefits people outside the school as well. Every year, the club collects new or gently used glasses to donate to the club. The reading glasses are given to people in the United States, but the prescription glasses are sent overseas to help people in poor countries who do not have ready access to corrective eyewear.

Today is “thank you Thursday,” and the school will send cards to local seminarians and clergy. The Bible quiz bowl on Thursdays is always a big competition for the students, too. On Friday, there will be a parent drive-thru as well as coffee and donuts. The lunch room will be full of goodies for staff and volunteers.

Every year, the school has a pep rally. This year, it is pre-recorded.

Kulp said the week is a chance to reflect on the good things happening at the school. Being at school brings a sense of normalcy to kids in an abnormal time, he said. There is more participation, students are happier and discipline problems are down. The kids also appreciate being in school all week.

“They just really appreciated what they have at Sacred Heart this year because they know some of their friends in the community don’t have that,” Kulp said. “It has really set the tone in the morning with prayer and reflection and has been really impactful for the kids.”

Kulp said he thinks March, when schools shut down last year, was a wake up call for a lot of kids who realized the classroom is not such a bad place to be. When students returned in August, the faculty and staff could see the difference in students.

On Wednesday, Erin Brinkley, a fifth grade teacher and dean of students, was dressed up as a diction-fairy — a play on dictionary. Brinkley said this week in particular gives students something to look forward to every day and gives faculty a chance to see students in a different light. This year, she sees the students embracing the opportunities they have each day.

Brinkley’s favorite part of the week is getting to express her creativity throughout.