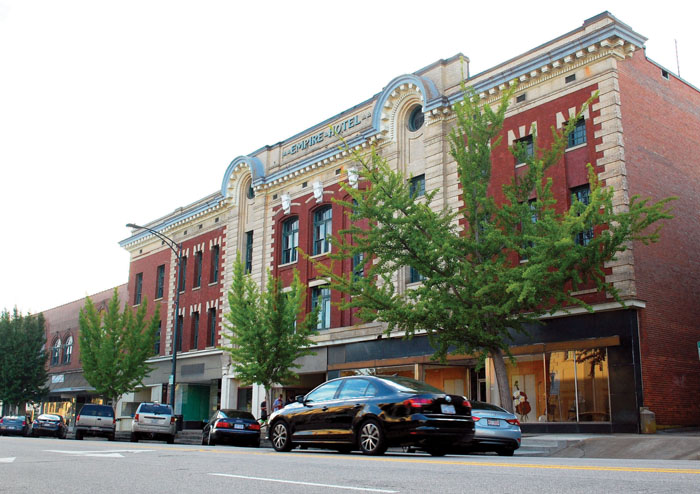 SALISBURY — Though a final decision on the future developer of the Empire Hotel project is to be determined, the city has narrowed the choices to two plans.

Mayor Karen Alexander said task force members have been meeting with developers to discuss proposals and get answers to more specific questions. The full Empire Redevelopment Task Force will meet today to further evaluate the proposals and the city’s willingness is to work with either plan.

That doesn’t mean a decision and announcement will be made after the meeting, said task force chair Whitney Wallace Williams. Most important, Williams said, is which plan is more feasible and seems like the best fit for downtown.

“It’s taken us much longer than anticipated due to the developers’ schedules and working around COVID-19 precautions,” Alexander said. “The result will be much better because we will have deeply looked at the proposals.”

Josh Barnhardt of Barnhardt Jewelers told the Post he’s one of the two developers and that he wanted to share his team’s approach for the space.

Barnhardt, who works with Iron Horse Development, said his approach involves working with other local development companies to separate the space into three sections. This approach allows local developers who know each other and can work well together to begin development at the same time. Financing from banks would be easier this way, Barnhardt said. It would still allow for a single purchase from Downtown Salisbury Inc.

Each section would be handled by different development companies. Barnhardt would focus on the area that once included the Efird’s Department Store, which operated at 226 S. Main St. on the Empire Hotel block.

He envisions that space with a “unique and historic” row home concept, which would look like walk-up town homes seen in other historic locations. “Row homes” originated in Europe in the 16th century and include a row of attached dwellings sharing side walls.

Bill Greene and Alfred Wilson, both of GreeneRock LLC, would focus on the center hotel section, Barnhardt said. Their proposal involves restoring the ballroom to host events such as weddings, with some nearby rooms serving as Airbnb spaces for visitors. Apartments would be built on the second and third floor.

Finally, Justin Mueller of Sherwood Development Group would focus on the former Montgomery Ward space. Barnhardt said a tenant has already expressed interest in setting up shop there to offer a small business incubator.

The ground floor of all sections would include retail stores and restaurants under Barnhardt’s proposal.

Local developer Pete Bogle of Bogle Firm Architecture would serve as the lead architect on all three sections since he “probably knows that building better than anybody in Salisbury,” Barnhardt said.

He added that this concept drives at least 60-100 new residents, entrepreneurship and tourism. That the team would have local roots leads Barnhardt to believe “we won’t have to raise a single dollar outside of Salisbury.”

“It completely changes the face of that section of downtown,” Barnhardt said. “And it’s a local team. We have roots here and we care deeply about Salisbury. This is not just another project for us. This is really the ‘crown jewel’ and we understand buildings like this just really don’t exist anymore. So we want to get this right.”

Any vote or final decision regarding the proposals would need to go before Downtown Salisbury Inc. From there, the next step would include developing contracts and timelines for the projects and financial projections. These things would need to be nailed down before DSI feels comfortable selling the property, Williams said.

Any additional incentives for the project would require approval from the Salisbury City Council, she added.

The hotel’s location is in an Opportunity Zone. It has been listed on the National Register of Historic Places as part of the Salisbury Historic District, listed as a local historic landmark and is now eligible for historic tax credits.

Barnhardt said he knows the project is a large undertaking, but having three developers on one project could cut down on the construction time. If his team is ultimately awarded the contract, he anticipates construction would begin in 2022 with usable spaces the following year.

The other proposal, Williams said, includes a combination of residential space and retail space along with a “boutique hotel” concept.

“Any one of the (proposals) is really exciting,” Alexander said. “I think that in the end, it’ll just boil down to what this task force as a whole believes would be the best for every aspect of the proposal. We’re very, very lucky to have the high quality that we have. That should really impress the public.”