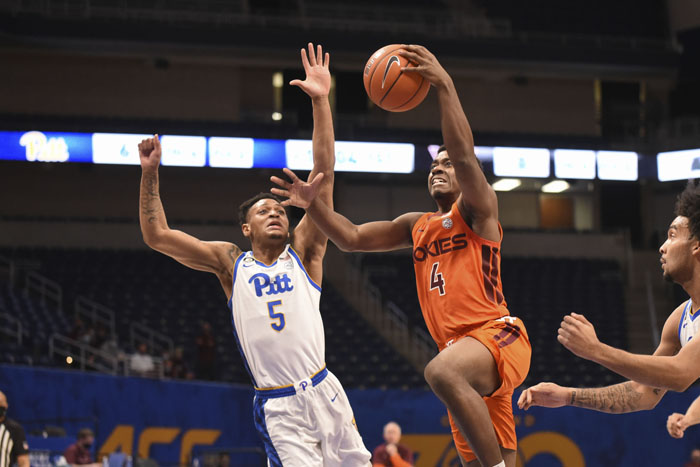 GREENVILLE —   Jayden Gardner and East Carolina didn’t get to savor a sea of court-storming home fans after claiming a huge upset. Instead, the Pirates left the court in a somewhat subdued celebration — until letting loose in the locker room, that is.

“I’m out of breath,” Gardner said with a smile.

He had 21 points and 15 rebounds to help ECU stun fifth-ranked Houston 82-73 on Wednesday night, securing the Pirates’ first win against a ranked opponent in nearly two decades. It was the Cougars’ first loss of 2021, a performance that befuddled coach Kelvin Sampson. “We just didn’t look like we were playing Cougar basketball tonight,” Sampson said, “in no form or fashion.”

Tremont Robinson-White added 17 points for East Carolina, which defied season-long offensive struggles against one of the nation’s top defensive teams. East Carolina shot 47% and made 11 of 24 3-pointers . The Pirates led for the last 12-plus minutes.

East Carolina (8-6, 2-6 American Athletic Conference) hadn’t won a game in more than a month between five straight losses and three postponements. The Pirates were also down starting swingman Brandon Suggs to injury and lost reserve guard Tyrie Jackson during the game to an apparent leg injury.

DeJon Jarreau matched his career high with 25 points to lead the Cougars (15-2, 10-2), who had won nine straight meetings dating to 2015, including wins by double-digit margins on ECU’s home floor in each of the past four seasons.

TUSCALOOSA, Ala. (AP) — Jaden Shackelford scored 19 points and the Crimson Tide widened its lead in the Southeastern Conference standings.

Cameron Thomas scored 22 points for LSU, which shot 16 more free throws than the home team but struggled from the floor, shooting 31%.

Johnson had been slumping, scoring a total of 26 points in the three losses, and was held out of Pitt’s starting lineup for the first time this season and second time in his three-year career. He shot 11 of 17 from the floor, including 4 of 7 from 3-point range, as the Panthers (9-5, 5-4 Atlantic Coast Conference) had their way against a usually stingy Virginia Tech defense.

Pittsburgh beat a ranked opponent for the first time since January 2019.

Panthers leading scorer Justin Champagnie had 13 rebounds and 10 points, his eighth double-double. Ithiel Horton, who also came off the bench for the first time this season, scored 15 points.

Second-year Hokies coach Mike Young’s defense-first minded team had an uncharacteristically tough time with Johnson and Pitt.  The Panthers shot 50% from the field and 57.7% in the second half.

Pitt had been scheduled to host No. 20 Florida State on Saturday, but after a positive COVID-19 test in the Seminoles program, will instead visit No. 14 Virginia.

GAINESVILLE, Fla. (AP) — AJ Lawson scored 22 points, Seventh Woods added 12 and South Carolina may have the Gators’ return to the rankings a brief one. South Carolina (5-6, 3-4 Southeastern Conference) dominated the Gators (10-5, 6-4) inside, outscoring them 50-30 in the paint.

Florida was playing its first game as a ranked team in more than 14 months. The Gators snuck into the Top 25 after winning four in a row.

CHARLESTON, S.C. (AP) — Kaleb Hunter had a season-high 22 points as UNC Greensboro won its seventh consecutive game, getting past The Citadel 85-66 on Wednesday night.

The Spartans improve to 2-0 against the Bulldogs this season. UNC Greensboro defeated The Citadel 87-73 on Jan. 18.
___