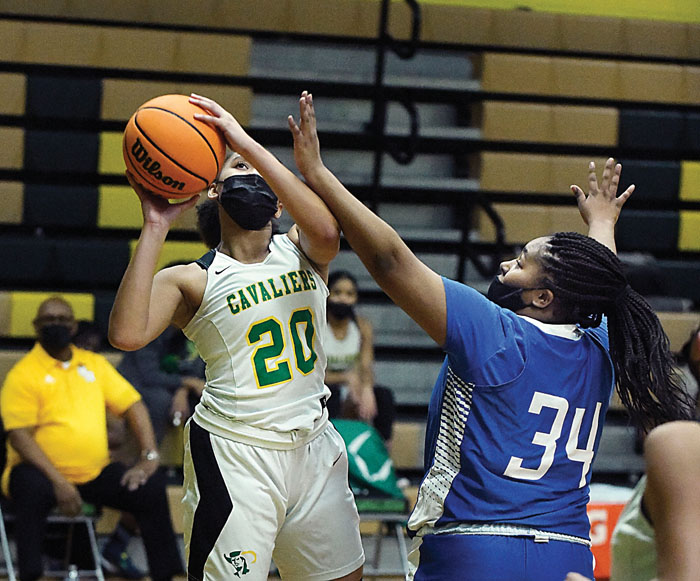 SPENCER — The North Rowan girls basketball team had a game scheduled for 6 p.m. on Wednesday, but at 2:30, Hannah Wilkerson arrived at the gym to work on her free throws.

Wilkerson has surpassed 1,000 career points as a junior.

Not because she’s the biggest (5-foot-8) or the quickest or the most gifted, but because no one outworks her.

“I remember her freshman year and we’d just lost a tough game at Albemarle and we were sitting there watching our boys play,” said Anthia Smith, an assistant for Wilkerson’s first two seasons, but now North’s first-year head coach. “Hannah didn’t want to sit and watch. She wanted to get back to our gym so she could work on some things.”

Wilkerson has stood out from the start. She scored 20 the first game of her freshman season. She made double-doubles a habit that season, averaged 16.2 points per game and totaled 453 points. The biggest joy for her came in North’s rise from a 4-6 start to a 16-12 finish. Late that season, North beat a good Albemarle team for the Yadkin Valley Conference Tournament championship.

That was a turning point for the Cavaliers’ program.

“It’s all about trying to win — that’s always the goal,” Wilkerson. “Our team has done a very good job of that the last three years.”

As a sophomore her role changed some, as North added more talent, including ball-handling freshman guard Kamora Cannie. Wilkerson averaged 15.9 points, scored 461 total for a second-place team that went 20-9. Her career game came in North’s second-round playoff loss to Community School of Davidson. She poured in 34, but North came up short, 66-61.

Wilkerson’s biggest strength besides work ethic is versatility. She can play the point, on the wing or in the post depending on game flow and matchups.

“She had to handle the ball a lot for us as a freshman, but we’ve got more ballhandlers now,” Smith said. “But she is capable of playing 1 to 4, anywhere from point guard  to power forward. She can do whatever we need her to do. She’s constantly working on her craft to be able to do that. She’s not just in the gym when we practice. She’s in the gym before practice and after practice and on the weekends.”

Wilkerson was introduced to the game very young, at kindergarten age, but it took some time for the game to seize hold of her.

Once it did, it never let go.

“I took a break for years,” she said. “But in the sixth grade I came back to basketball. That’s when I got serious about it.”

North (5-0 YVC) has continued to make strides in this strange, delayed COVID season and has a good chance to take an outright regular-season conference title for the first time in program history. The 2006 Cavaliers shared the conference crown.

Wilkerson hasn’t let up any. She’s had double-figure points in all but one game and double-figure rebounds in several games. She’s getting more blocks and more assists than ever.

“The biggest change for me as a junior has been as an encourager for our young players,” Wilkerson said. “I try to share my knowledge with them, try to let them know what it means to be a Cavalier.”

Wilkerson’s 1,000th point came, ironically enough, during North’s first setback of the season, a 48-47 non-conference loss at Thomasville on Jan. 27. She scored 20 in that one.

North honored Wilkerson pregame on Wednesday with a special ball.

“I thank God, my pastor, my family, my coaches and my teammates,” Wilkerson said. “I’ve had a lot of support to get to this point.”