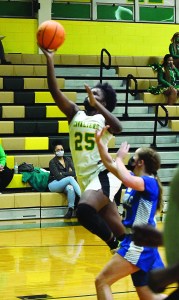 West Stokes is ranked fourth in 2A.

North started strong, but a six-point second quarter led to a 29-23 halftime deficit.

“It’s the kind of game we needed before the playoffs,” North coach Anthia Smith said. “We missed some opportunities tonight, but it still was a good game for us. We’ll continue to grow as a team.”

The Cavaliers (6-2) got 21 points and five steals from Kamora Cannie.