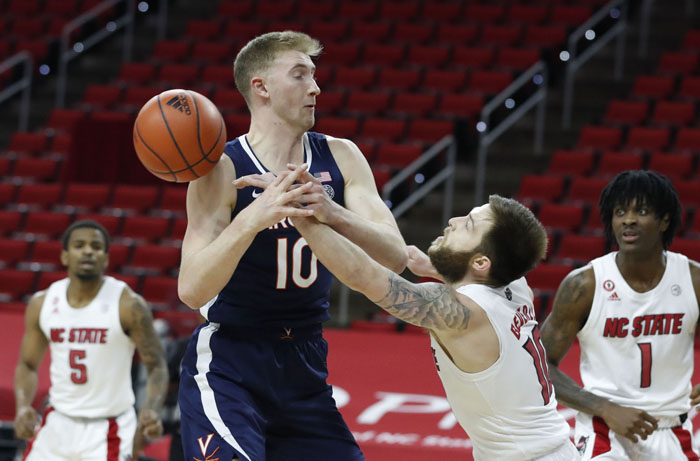 North Carolina State’s Braxton Beverly tries to get the ball from Virginia’s Sam Hauser (10) in the Cavaliers’ victory Wednesday night. Hauser finished with 18 points on the night. Photo courtesy of ACC

Jericole Hellems poured in 23 points before fouling out for N.C. State (7-7, 3-6), which won just one game in January.

Hellems’ jumper gave the Wolfpack a 46-45 lead with less than 6 1/2 minutes remaining as Virginia endured an eight-minute stretch without a field goal.
Hauser hit a 3-pointer to break the drought, allowing the Cavaliers to build a 50-46 edge with 5:38 to play. Huff converted a three-point play to stretch the lead to 55-48.

Virginia scored the next nine points and led 28-24 at the break.

Virginia won its seventh straight road game in the series.

Virginia: While the ACC-leading Cavaliers had trouble scoring from the field at times, they made 20 of 22 free throws (90.9%). They entered the week third nationally in free-throw shooting at 80.4%.

N.C. State forward D.J. Funderburk, who was held out of Sunday night’s loss at Syracuse because of “university policies,” was back in action. He entered about five minutes into the game, finishing with nine points — all in the second half. He scored a team-high 14 points in last season’s win at Virginia.

N.C. State will travel to Virginia for a rematch in three weeks. The Feb. 24 pairing was announced earlier Wednesday amid several schedule adjustments within the ACC. The teams were slated to meet Jan. 20, but that game was postponed because of N.C. State’s coronavirus protocols.

Virginia: Hosts Pittsburgh on Saturday, a matchup announced earlier Wednesday after the Louisville-Virginia game was nixed because of Louisville’s coronavirus issues.