As some improve, Rowan County remains in ‘critical’ tier for COVID-19 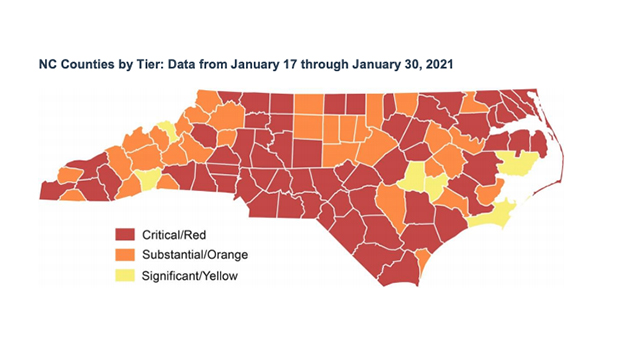 This map shows counties by their classification in the state's alert system for COVID-19. Red counties fall in the worst tier. Orange are in the middle and Yellow are in the lowest tier.

SALISBURY — About two dozen counties on Thursday moved out of the state’s worst, or “critical,” tier in the county alert system, but Rowan was one of dozens that did not.

In its biweekly update of the system, 61 counties remained in the critical tier, 33 were in the middle, or substantial, tier and six were in the lowest category of “significant.” That compares favorably to two weeks ago, when there were 86 “critical,” 13 “substantial” and one “significant” county.

“North Carolinians are working hard to protect one another and we’re seeing the results, but there is still a lot of work ahead of us,” Health and Human Services Secretary Mandy Cohen said during a news conference.

Rowan remained in the “critical” category because of its number of positives per capita reported in the previous 14 days (896.6 per 100,000) as well as the percent of cases returning positive during the same period (14.2%).

All of Rowan’s neighboring counties also are in the “critical” category.

In local statistics, the county officially attributed 150 new positives to Thursday’s report, which is among the top 10 for positives reported in a day.

Across the state Thursday, there were 5,495 newly reported positives, 2,630 people hospitalized, 9,728 total deaths and 781,802 total positives. There have been 9.08 million completed tests in North Carolina.