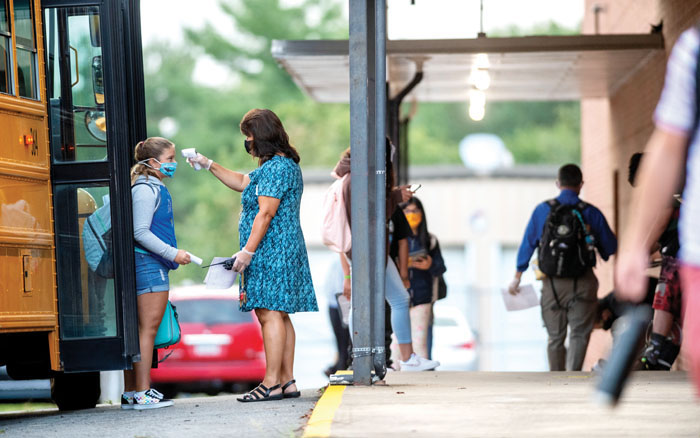 Salisbury Post file photo - Corriher-Lipe Middle School Assistant Principal Paula Sloop uses a portable medical thermometer to check the students as they arrive by bus during the first day of school on Aug. 17, 2020.

SALISBURY — While Gov. Roy Cooper on Tuesday urged districts to bring students back to the classroom, Rowan-Salisbury Schools Superintendent Tony Watlington says RSS students have been in buildings since August and that the district’s plan is “in a good place.”

Still, Watlington and other school leaders plan to talk about the new recommendation and whether changes are needed. There’s a strong recommendation, Watlington said, to bring elementary students back full time — something that’s been allowed since October. RSS hasn’t wavered from its blended model for all grades since August.

The state’s 115 school districts and public charter schools have all handled the pandemic differently. Some sent students back to school in a blended model, some began all virtual and others have moved between the two as the pandemic has evolved during the past few months. In a letter to school leaders, state leaders urged that schools provide some in-person instruction; he didn’t go as far as saying schools should be in person five days per week.

“We urge you to make sure our children will have the opportunity to be back in the classroom,” stated a letter signed by Cooper, N.C. Department of Health and Human Services Secretary Mandy Cohen, Superintendent of Public Instruction Catherine Truitt and State Board of Education Chair Eric C. Davis.

The four state leaders also gathered for a news conference on Tuesday to make their announcement.

“Protecting the health and safety of the people of this state, especially our children and our teachers, has been our goal,” Cooper said. “We know school is important for reasons beyond academic instruction. School is where students learn social skills, get reliable meals, and find their voices. Research done right here in North Carolina tells us that in-person learning is working and that students can be in classrooms safely with the right safety protocols in place.”

The announcement cited learning loss and negative impact on children due to isolation as concerns leading to the recommendation, but a bill, Senate Bill 37, moving through state legislative committees on Tuesday would require schools to return students to classrooms. Cooper could veto the bill if it passes both houses. It would require a supermajority to override.

Immediately after Cooper’s announcement, the N.C. Association of Educators released a statement imploring Cooper to vaccinate all educators in the state by March if the state intends to send everyone back to classes full time.

During the conference, Cooper said he believes local control is important. Truitt said she hopes the announcement empowers school districts to require students and teachers to return to the classroom while also offering a remote option. A remote option has been mandated since classes began in August.

Watlington said the bottom line is districts throughout the state are all doing different things at the moment, but he does not feel the RSS board has to do anything different immediately.

Rowan-Salisbury Schools has felt the impact of COVID-19 particularly hard in recent weeks with the death of Knox Middle School teacher Matthew Beaver on Jan. 19 after he tested positive for COVID-19. Meanwhile, there were five cases reported this week at Salisbury High School. The district says the infections are not linked.

To date, the state has not recorded any clusters, five or more linked cases, in RSS. It is one of the few districts in the state to provide an in-person plan to students the entire school year.

Kannapolis City Schools began in plan B, eventually moved elementary students to plan A and then decided to temporarily move to virtual learning when students returned to classes from winter break in January to offset concerns about a spike in cases due to the holidays. The Kannapolis City Board of Education extended virtual learning to Feb. 15 last week.

KCS Superintendent Chip Buckwell said he was hoping to find clarity from a meeting of state superintendents after Cooper’s announcement, but found none. There were so many questions submitted in the chat that the governor’s office is making a frequently asked questions document to answer them.

Buckwell said districts need to do what is right for them. Kannapolis City Schools will have a principal meeting on Wednesday and the issue will be discussed with school leadership.

Buckwell said logistics of making changes to school schedules is harder than people think. There is more to the process than just opening doors, like sorting out nutrition and transportation plans.