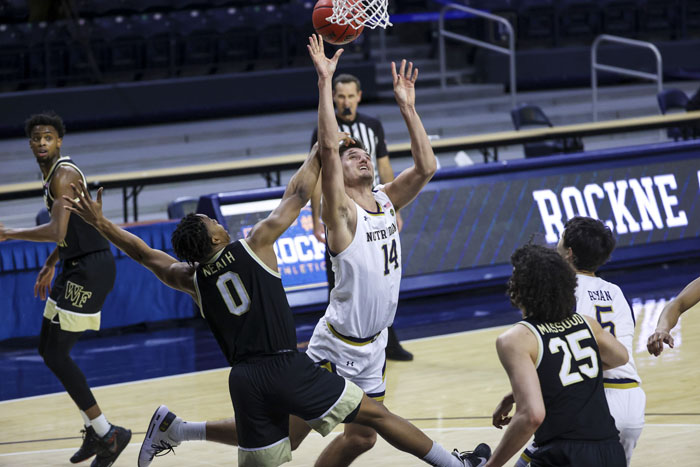 After leading 35-32 at the break, Notre Dame started the second half on a 16-0 run for a 51-32 advantage. Prentiss Hubb opened and closed the spurt with 3-pointers, and Wake Forest didn’t make its first basket until the 14:47 mark. With four minutes remaining, Durham converted a three-point play to make it 75-47.

Dane Goodwin and Hubb each scored 10 points for Notre Dame (7-9, 4-6 ACC), which has won four of its last five games. Nate Laszewski grabbed 10 rebounds, and Hubb also had five rebounds and 10 assists.

Notre Dame plays at Georgia Tech on Saturday while Wake Forest is off until Feb. 10 when it faces Boston College.

AUSTIN, Texas — Texas played Baylor tougher than most teams have this season. The Bears still shrugged off the Longhorns to stay unbeaten.

Davion Mitchell scored 27 points and No. 2 Baylor used a big run to pull away for an 83-69 victory over sixth-ranked Texas on Tuesday night.

Baylor (17-0, 9-0 Big 12) has won every game this season by at least eight points and looked to be in a fight with its closest pursuer in the conference.

Texas (11-4, 5-3) was within six points late before Baylor pulled away behind open 3-pointers from Adam Flagler and Mitchell.

Andrew Jones scored a career-high 25 points for the Longhorns, who were back to full strength after going without two starters and coach Shaka Smart in a loss to Oklahoma last week because of COVID-19.

Texas also had two games postponed and another canceled. The Longhorns are having one of their best seasons in years but have lost three of their past four at home.

Garza is the nation’s leading scorer at 26.4 points per game and became the second 2,000-point scorer in program history. He is 107 points behind all-time leading scorer Roy Marble.

The Hawkeyes (13-4, 7-3 Big Ten) led 79-70 before the Spartans (8-7, 2-7) went on an 8-1 run. Michigan State had a chance to tie the game after forcing a shot-clock violation, but Joshua Langford missed a jumper with 24 seconds left.  Iowa’s Jordan Bohannon closed the game with four free throws.

It was the fourth consecutive loss for the Spartans. Iowa snapped a five-game losing streak to Michigan State, which came in having won 19 of the last 22 in the series.

OXFORD, Miss. (AP) — Devontae Shuler scored 15 points and fueled a second-half rally as Mississippi upset the Volunteers in the Rebels’ first win over a ranked team in two years.

Ole Miss (9-8, 4-6 Southeastern Conference) rallied from an 11-point first-half deficit and then withstood a late challenge by the Volunteers (12-4, 8-4) to stop a two-game skid.

Josiah-Jordan James’s 3-point attempt at the buzzer bounced off the rim.

AMES, Iowa (AP) — Taz Sherman hit two free throws with 6.4 seconds remaining and finished with 18 points as the Mountaineers held on. Sherman made 7 of 8 shots from the line for the Mountaineers (12-5, 5-3 Big 12).

Iowa State continues to reel from COVID-related issues and is on pace for its worst season since the 1970s. West Virginia’s next six games are against ranked teams, starting with Saturday’s game against. No. 23 Kansas.

Purdue led 60-55 with 1:43 remaining before Darryl Morsell drilled a 3-pointer and Ayala finished up with three free throws. Ayala made 1 of 2 at the line with 48 seconds to go and hit the final two after missing a layup, collecting his own rebound and getting fouled by Jaden Ivey.

Purdue then committed a turnover before attempting a final shot. Aaron Wiggins had 18 points for Maryland (10-8, 4-7).