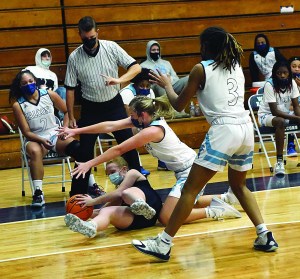 The game had little in common with the Falcons’ wild 67-61 struggle to overcome the Vikings on the road two weeks ago.

Freshman Emma Clarke had her best game of the season, scoring 16, including 12 in the first half when the Falcons established a 32-15 lead.

West limited high-scoring Ashtyn Zeigler to nine points and held the Vikings (3-4, 3-3) to single digits in every quarter.

The victory puts West (7-1, 5-1)  firmly in control of second place in the North Piedmont Conference. The Falcons have won three straight since a loss to unbeaten Carson.

“We’ve had a good season for a young team,” Poole said. “We just want to keep getting better every game.”