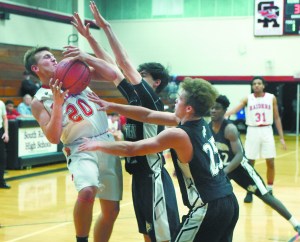 South’s Barrett Thompson has been around a long time, but he had a career game to lead the Raiders on Wednesday. Photo by Wayne Hinshaw, for the Salisbury Post

The big effort by South was somewhat surprising after a 40-point loss at Thomasville 24 hours earlier, but you never know in high school sports.

“We had a shot with three minutes to go down by four,” South head coach Daniel Blevins said. “We took a timeout and got the shot we wanted to close the gap.  It didn’t go and then we missed the put back and they made two big 3-pointers on their next two possessions.”

“We played a much better game tonight,” Blevins said. “We cleaned up some of the turnovers and executed better in our offense. It was a great effort against a really good team.”

South is scheduled to host Lexington on Friday.