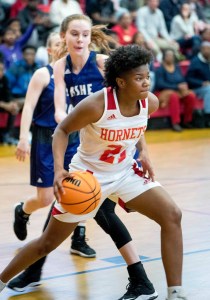 Trouble for the Hornets?

Not really. They still crushed Ledford 54-23, which tells you something about how deep and how good the Hornets are.

Salisbury’s record (8-1, 6-0) is deceiving. Everyone sees the loss and believes they’re beatable. But the loss was to a 4A, one of the best 4As, and it was by one point.

Against any 2A, they are capable of being a handful. They were 29-2 last season, and they’re much deeper than they were last season.

“We missed a lot of layups and shots that we normally make tonight,” Salisbury head coach Lakia Brice said with a sigh. “But this was a different kind of game. This was a very hard, defensive-minded game, and I think it’s a game that we really needed.”

Ledford’s game plan was sound. The Panthers (8-1, 5-1) came into the game undefeated for a reason. They have solid, fundamental ball-handlers, and the idea was to let the Hornets wear themselves out playing defense, to get them into foul trouble. Pass and move and pass and cut. Patience was going to be the key for the Panthers. For a while, they displayed that attribute.

Ledford’s opening possession lasted nearly 35 seconds. It ended with a walking violation, but it was still 0-0 on the scoreboard, and so far, so good.

Ledford defends well. The Panthers actually are better without the ball then with it. In the early going, the Hornets were in for a halfcourt scrap on every possession. Nothing was easy.

Salisbury led 7-3 after a quarter. Ledford had the tempo it wanted. The visitors just couldn’t knock down any shots.

Ledford stayed with the plan in the second quarter, and the fouls started to pile up on the Hornets. Fortunately for Salisbury, they were widely distributed. No one had more than two.

When Ledford missed the front end on three straight one-and-one opportunities, some frustration set in and things started to slip away from the Panthers.

Jamecia Huntley was playing well in the paint for the Hornets, making quick moves to the hoop. Makayla Noble and Icesis Nwafor brought size and power and offensive boards off the bench. Salisbury started getting some full-court stuff, easy ones here and there off turnovers or long rebounds. Suddenly, the Hornets were up by double digits, and by halftime, it was 29-11.

As difficult as it was for Ledford to score, it was basically over.

When the relentless Hornets held Ledford to a single bucket in the third quarter, it was 37-14.

“This was a grind-it-out,” Brice said. “Maybe we struggled on offense because Ledford made us work so long and so hard on defense. We didn’t have our legs and we didn’t go up as strong on our layups as we usually do. We had to use all our energy on defense, but we stayed focused. Ledford has a very good team and we beat them by 31. That means we had a defensive effort we can be be proud of.”

Salisbury didn’t look any quicker than Ledford, but the Hornets were stronger. They are physically tough, powerful, aggressive, and especially in the second half, the officials let the girls play. That was an advantage for the Hornets.

“Our size and our height bothered some good shooters,” Brice said.

Salisbury has moved to the top of the MaxPreps 2A rankings, which is probably where they should’ve been all along.

Ledford, which got got eight points, from Sophie Conger, was ranked eighth in 2A.