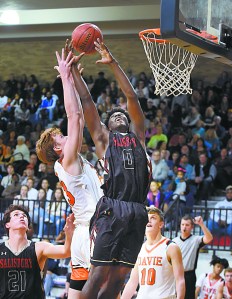 Salisbury’s Jalon Walker was a beast on Tuesday. Photo by Wayne Hinshaw, for the Salisbury Post.

SALISBURY — Jalon Walker has his pick of colleges nationwide as a football linebacker, but Salisbury basketball head coach Bryan Withers has raved all season about the commitment Walker has made to the school’s basketball team.

Walker’s dedication to his second sport has come in this strange COVID-modified school year in which basketball season precedes football.

Ledford brought a tough, good-shooting team to Salisbury’s gym, but Walker out-athleted the Panthers in the decisive third quarter. He out-jumped them. He out-muscled them. He out-worked them. He out-everythinged them. The Hornets won 71-53.

“That stat line Jalon had, that’s an amazing night for anyone,” Withers said.

Winners of six straight, Salisbury (6-3, 6-0) plays in spurts. That’s been the case all season. But the spurts are getting longer, while the droughts are getting shorter. If the Hornets can ever put 32 minutes together, it will be scary.

“It’s coming,” Withers said. “I’ve been saying it all along. We played a good second half and beat Central Davidson. We played one quarter and beat Oak Grove. Tonight we played well for three quarters.”

That’s basically. Throw out the closing four minutes when both teams were just getting some guys into the game. In the second quarter, the Hornets were really good and in the third quarter, they were devastating.

Withers said a key to the Hornets’ improvement has been competitive practices.

‘We can put 10 good guys out there and let them go at it,” Withers said. “Especially if we put the Walker brothers (Jalon and Deuce) on opposing teams. They’re pretty competitive with each other.”

The first quarter was hard to watch. Salisbury had a terrible time getting untracked, threatened to break backboards with layup attempts, and watched Ledford take advantage. Tyler Partee looked like the smoothest and smartest player on the floor. He led the Panthers to a 13-9 lead after a quarter.

But in the second quarter, Salisbury shooter Cameron Stout found a groove. He’s a husky guy who doesn’t look like a bomber, but his touch is velvet. He knocked down two 3-pointers and finished a tough three-point play with a spin, and suddenly the Hornets had serious energy. They whipped the visitors 21-11 in the second quarter and led 30-24 at halftime.

The Hornets took momentum to the third quarter, and that’s when they became a freight train. Walker was catching the ball around the foul line and doing special things with it. Ordinarily, defenders don’t mind him shooting from 15 feet, but on this night, he was scoring and his passing skills got Nate Brown layups. Brown is the Hornets’ leading scorer, but he had struggled through a quiet first half.  Then Walker got him involved, and suddenly there was no stopping either of them.

It was 53-38 by the end of the third quarter. It was 62-39 early in the fourth quarter when the Hornets ramped down the intensity a bit and subbed freely.

Stout scored 17 points. Joe Witherspoon was a magnet for loose balls around the hoop and finished transition opportunities and scored 14. Brown added 12.

Ledford got 15 points each from Partee (his father Jonathan was a three-sport star for Salisbury) and Owen Finley, who mixed drives with 3-pointers.

Ledford (6-2, 4-2) was undefeated before it lost to Central Davidson on Friday. The CCC is a wild league, but now it’s likely to come down to next week’s confrontation between North Davidson and the Hornets.