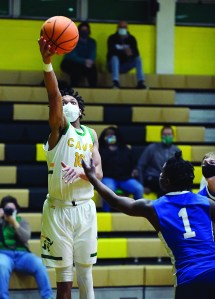 MISENHEIMER — It was easy for North Rowan’s boys on Tuesday at Gray Stone, but the Cavaliers weren’t complaining.

Not after several frustrating weeks to start the season.

North led the Knights 42-11 at halftime and coasted to a 72-19 Yadkin Valley Conference victory.

North dropped its first three YVC games, but has won the last three.

North (3-5 overall)  has topped 60 points in its last three league games, after failing to get to 50 in the first three.

North made nine 3-pointers Tuesday, so some of the shooting struggles have been corrected.

Gray Stone (0-6, 0-6)  got six points each from seniors Colin Foley and Matthew Lowder.

North is in action again on Wedneday night, hosting South Stanly, a team that it beat on the road.