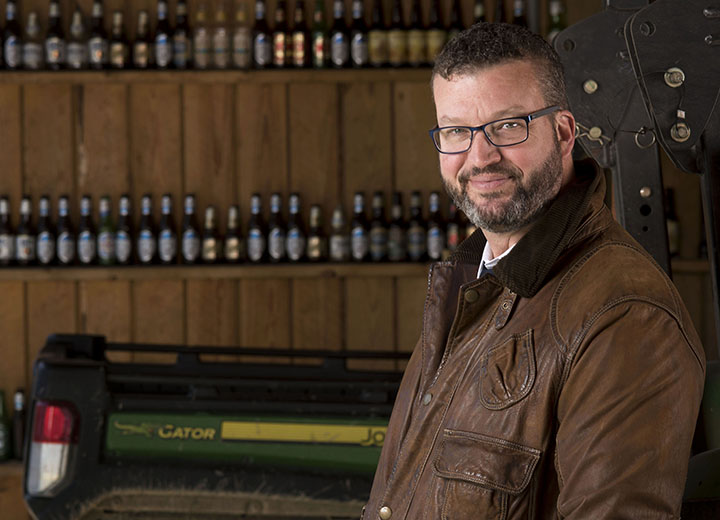 JON C. LAKEY / SALISBURY THE MAGAZINE Author John Hart comes to his secluded tractor shed with a office attached that is situated on the crest of a wooded knoll overlooking an nearby farm near Charlottesville, Virginia, to work on his craft of writing.

Hart proves it again with his latest, “The Unwilling,” 150,000 copies of which have been printed to be ready for release this week.

It’s been almost 15 years since former North Carolina lawyer John Hart hit the big time in the writing world with his bestselling debut novel set in Salisbury where he grew up. “The King of Lies,” introduced us to a struggling, troubled lawyer in dark circumstances. His next books, “Down River” and “The Last Child,” earned Hart two Edgar Awards for best mystery novel. More successes came with “Iron House,” “Redemption Road,” and “The Hush.”

These books, wrote author Corban Addison, “raised the bar for commercial fiction, deftly blending the tension, pacing, and suspense of the classic thriller with characters so richly drawn and prose so elegant that his stories are worthy of being called literature.”

“The Unwilling” holds to Hart’s successful formula. But there is a difference, Hart says, because the new book is set in the past, in the Vietnam era, rather than the present day. The action takes place in Charlotte and the surrounding area, not on the military front. But because the impact of the war is pronounced and devastating, the book can be characterized as “anti-war.”

Hart explains, “I’ve always wanted to set a novel in the past — an entirely unique challenge — and to recreate the world I remember from childhood — no cellphones or computers. It made sense, too, to set this book at a time when our country felt equally torn, partly because tension like that makes for good storytelling, but also to celebrate that we’ve lived through hard times before — been equally divided — and that brighter days come when people act in good faith.

“More profoundly, I wanted to speak to the unchanging nature of humanity, the good and bad of us all. People often mistake my intent, believing I write dark, when that’s not entirely true. Instead, I write about the search for light in dark places. That means building rich, flawed characters and then turning up the heat to see what choices they’ll make as the softness around them cooks away.

“Wartime or peace, at home or on the dim streets of a midnight city, it’s what humanity is about, how we handle love and hope, fear and loss, the enduring questions that confront us each generation, to do the right thing or the wrong, rise or fall, sacrifice or surrender.”

The new book’s action revolves around the family of police detective Bill French and his wife Gabriel. Their youngest son, Gibby is a high school senior. Their two older sons, twins, fought in Vietnam. One was killed in action. The other, Jason, came back from the war wounded in body and mind.

As the book opens, Jason returns to Charlotte after serving time in prison for a series of crimes. He wants to bond with Gibby, the only family member to whom he can relate. Grieving for her dead son, Gabriel wishes Jason had died instead and wants Gibby to have nothing to do with him. Bill’s position as a detective complicates the conflicts Jason and Gibby will have with the law, drug gangs, illegal weapons trade, and sex activities that lead to both brothers being suspected of murder.

When Jason goes back to prison, he is greeted by a death row inmate, whose great wealth has enabled him to live in luxury and control an outside criminal operation. This prisoner, “X,” is one of Hart’s darkest characters and certainly one that will both repel and seduce the reader.

A host of other horrible people and scenes makes for a grim read, but the heart of the story is a family struggling with the damage done by a war that has taken two sons and threatens to take a third.

The title of the book comes from a quote Hart attributes to an unknown soldier and which sums up the book’s theme.

“We the unwilling, led by the unqualified to kill the unfortunate, die for the ungrateful.”

Letters to the editor: May 29

My turn, Evelyn Uddin-khan: Wake up America and smell the gunpowder