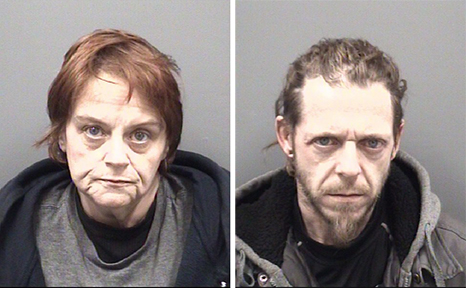 SALISBURY — A man and woman face drug charges after backing an SUV into the woods and hanging blankets to block the windows, the Rowan County Sheriff’s Office said.

Maj. John Sifford of the Sheriff’s Office said deputies were in the area of 10500 Old Beatty Ford Road on Friday to locate stolen property in an unrelated case when they saw a newer-model SUV that was backed into the woods and had blankets hung up so that it wasn’t possible to see in.

Occupants of the vehicle, Miller and Morgan, told deputies they parked sometime after sunrise, Sifford said. The vehicle, which was registered to a woman in Statesville, belonged to a friend who allowed them to borrow it, the pair told deputies.

When Miller got out of the vehicle, deputies saw a glass smoking pipe and a metal tin in the passenger area, Sifford said. Inside the metal tin, deputies found drug paraphernalia and a small crystal substance that they believed to be methamphetamine.

Miller and Morgan were initially booked into jail with a $2,000 secured bond. As part of a search during Miller’s booking process, a bag that contained a half-gram of methamphetamine fell on the floor. She was charged with the additional crimes and given an added bond of $2,000.