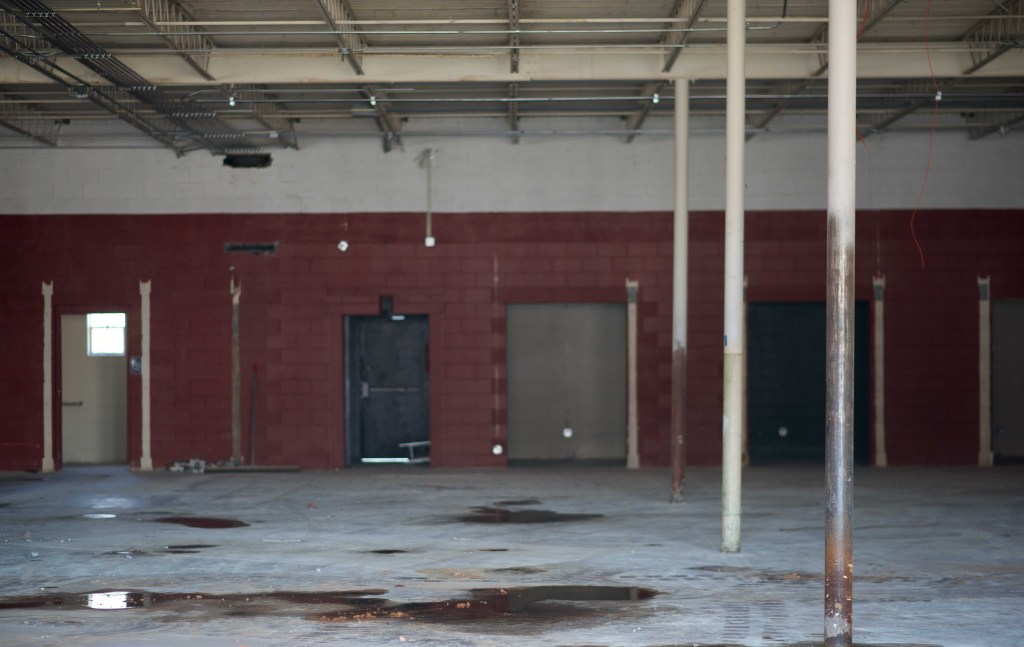 Carl Blankenship/Salisbury Post - Construction is in the demolition phase on the inside of the building.

It is being transformed into Spencer’s new municipal complex and the location for the N.C. Museum of Dolls and Toys. Both the town administration and the museum will move from a block away to a once-booming shopping district at the center of town.

Park Plaza will house all the town’s departments. The current town hall, a former railroad dormitory, is a sign of the town’s heritage.

The first month of construction is dedicated to demolition. The part of the building the town will occupy is just a shell with a construction office inside and some sections cut out of the concrete floor where utilities will run.

The project is expected to continue until Oct. 15. according to the preliminary schedule. By then, it will have a new roof, front fascia and an interior filled with new walls, offices and storage. The dentist’s office in the center of Park Plaza will stay, and a new fire wall will be installed between the town portion and the museum.

Town Manager Peter Franzese said Spencer needs to hire a special inspector for steel and concrete work. That process will happen over the next few weeks. The town is also in talks with vendors for security at the facility.

Franzese said one of the most significant parts of the project is the repair to the roof, which is in “pretty rough condition.”

A project sign with a rendering will be placed at the corner of Fifth Street and Salisbury Avenue next week, something Franzese hopes will drum up interest in the project, which traces its roots back to 2015. Years later and after a failed bidding process in 2019, Spencer late last year awarded contracts and secured funding through the U.S. Department of Agriculture and Truist Bank.

Mayor Jonathan Williams, a civil engineer, cites Park Plaza and other capital projects the town has taken on as part of his motivation for running for the position.

Franzese said part of the disadvantage of being the new guy, appointed in December, is that he does not know the full history of what was in the part of the building the town purchased. Parts of Park Plaza have been vacant for decades, and it became a revolving door for businesses in the 1990s. It was built at the height of Spencer’s rail boom.

“I think it’s huge for the community that the town’s making the investment here,” Franzese said.

Franzese said there are no final plans for the old town hall once the administration moves out, but it may be difficult for someone to make use of it because of the building’s construction. The property may have more appeal without the building, he said.