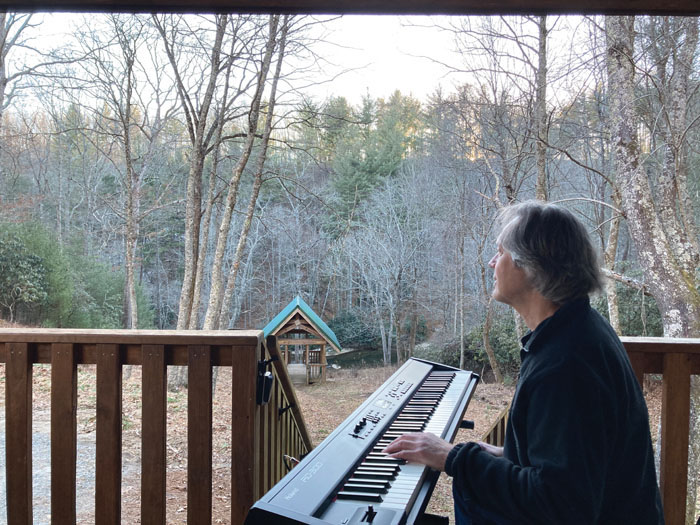 Submitted photo Musician Marc Hoffman visited his property in the mountains for a quiet getaway to work on his upcoming album.

As contradictory as it may seem, the pandemic has kept Marc Hoffman away from his favorite spot for making music.

Hoffman’s two Airbnb properties — one near Sparta on the Little River and another in Ashe County — have seen near-constant bookings. That’s been good for business, but kept Hoffman away from making a creative getaway.

There were months where both were rented almost every night. In February, about 15 nights were already reserved, he said.

It’s a trend that’s expected to continue as people opt for more remote rentals. Airbnb said last year it saw a shift to more remote and socially distanced stays in the top-booked property types. That means cabins and cottages instead of townhouses.

“People want to just get away,” Hoffman said in a phone interview from the cabin in Sparta after returning to the retreat for the first time in weeks.

Besides allowing vacationers to get away, isolation makes for good music-making, too, whether it’s strumming a few chords by the river on a ukulele or spending nights with silence all around as Hoffman works through a song idea.

As he’s been able to escape to the cabin hideaway, Hoffman has been fine-tuning an album to release in April or May. He’s drawing inspiration from modern day questions about morals, what’s the truth and whether something is right or wrong.

Earlier this month, he also released an original album titled “Always Waiting” that’s available on all the usual streaming sites and services.

He describes it as an album with its roots in jazz, classical music and pop. He didn’t set out to create a record full of relationship-type songs, but that’s how things ended up.

“This is a personal record, with songs that cover the search for meaning in the universe, the affirmation of love, the regret of lost love, dreams of now and what comes next, and of love for the moon,” Hoffman said.

He wrote most songs on the album prior to the pandemic. So, his work to create a final product mostly meant pulling the right material together, deciding what worked and mixing and mastering it.

When he needs just the right percussion hit or bass sound, he turns to Oldhouse Recording Studio and Chris Garges in Charlotte. For mastering, Hoffman gets help from Scott Crags and Old Colony Mastering Studio in Boston.

The pandemic hasn’t brought major changes to the way Hoffman mixes and makes his music, but it has affected other parts of his music career.

He’s needed to move online to teach his students. For piano students, that means using video chat services to watch the student’s hands on the keyboard. And for voice students, he’s not able to play along as the person sings, instead preparing something for the lesson. Composition students already sent Hoffman their pieces online. So, there’s been no changes there.

Understandably, live performances are either canceled or not happening at all. Because it’s more difficult to make money on streaming services than selling CDs, the halt to events was a significant hit.

Pre-pandemic, Hoffman was a fixture at Eddie V’s Prime Seafood, a restaurant at the corner of Trade and Tryon in uptown Charlotte. By March 17, however, the restaurant stopped live music and switched food services to takeout only.

“That was probably 80 gigs for the year gone,” he said, saying he lost about 125 total events.

With weddings almost entirely canceled, another source of events dried up. As he talked to the Post, Hoffman said he had just confirmed a date for April 2022.

“Almost every wedding I had was canceled immediately,” he said. “I had several of them reschedule twice.”

But there was a trickle of events and online performances to fill the gap. At an outdoor wedding at the Biltmore in Asheville, Hoffman was in a separate room during the performance.

With the pandemic still here and live events not completely back to normal, Hoffman was looking forward to making more music, diving through some of his unpublished work and releasing more albums. To contact Hoffman or find links to his music, go to marchoffman.com.