Ihme’s selling point is endurance. Cross country benefits stamina no matter what sport an athlete sees as his or her priority. 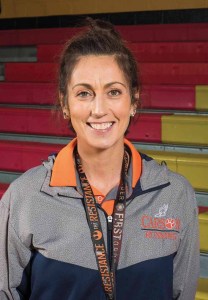 “It amazes me how female athletes want to be better at their sport, but don’t want to do anything in the off-season to improve endurance,” Ihme said. “That’s how I originally approached Camden Corley and Makayla Borst. Makayla for soccer and Camden for basketball.”

Corley, a junior, and Borst, a sophomore, are cross-training recruits who blossomed into a success story.

They share the Post’s Rowan County Runner of the Year accolade for the 2020-21 COVID season.

Both girls ran well in a chilly 3A West Regional, with Borst pacing the Cougars.

Corley took up running as a freshman for the 2018 fall season.

“I remember them asking if any of the basketball players wanted to run, and I tried it and I was surprised by how much I liked it,” Corley said. “After that, I just ran with it.”

Corley’s modest freshman season offered few hints that she’d become an an individual county champion. She was 16th in the county meet at Dan Nicholas Park that year, the seventh of Carson’s seven runners. She was clocked in 23:45.

She was 18th in the 2018 North Piedmont Conference championships, and again she was the last Carson runner. But she learned that it was a barrel of fun to be part of a championship team. 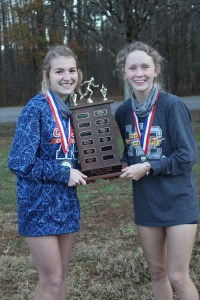 Corley progressed in 2019. Part of her progress was due to the addition to the team of Borst. Borst is a pretty terrific soccer player, and Ihme had convinced her cross country would enhance her soccer ability.

“That’s how cross country started for me,” Borst said. “Cross country was a way to keep in shape for soccer and also for track. My twin sister (Haley) was going to run. She and Coach Ihme talked me into trying it.”

Corley and Borst were of identical natural ability and possessed equal drive to get better. Corley is bubbly, while Borst is quiet, but they were kindred spirits. They always ran together. They were instrumental in Carson’s 2019 Rowan County championship. They were the third and fourth runners for the Cougars. Corley placed eighth in 22:42, while Borst was ninth in 22:51.

Taylor Conrad led Carson’s team for years. Her graduation left a void, and there was some uncertainty entering this shortened COVID season. Normally, a large team, Carson’s numbers dwindled as the season was pushed back and summer and fall activities were curtailed by pandemic restrictions.

Corley and Borst emerged as the new leaders for the Cougars.

“Both girls are hard workers, obviously, but I can’t tell you which one is more competitive,” Ihme said. “There were times we had to strongly encourage them not to run side by side. One of them needed to take the lead. I think they felt a sense of comfort with each other at first. You couldn’t get a photo of one without the other. But that changed when we actually started running for a championship.”

At the Rowan County Championships contested on a new layout at Dan Nicholas Park, the Carson girls finished 1-2-3-4-6 for a repeat county championship. Corley built what looked like a safe lead, but Borst was closing fast at the end. Corley’s winning time was 21:29.23. Borst clocked 21:29.93.

“Winning makes me happy,” Corley said. “Whether it’s an individual win or the team winning. The county was the best day of the season for me because I was excited about me winning and the team winning.”

As cross country and basketball seasons began to overlap, there was more strain on Corley. Ihme said that was a factor in Borst moving past her in the conference and regional meets.

If Corley had basketball and cross country practices “right on top of each other,” she would go to her cross county session.

“I remember a 24-hour period where our cross country girls had two basketball practices and ran 12 miles,” Ihme said. “So it was tough for Camden. Camden and Makayla are pretty much best friends before and after a race, but when that gun goes off that is over and they are trying to beat each other. In the end though, no matter who wins, I do believe the other looks at losing as a chance to improve. The friendship is back and they get right back to pushing each other.”

It was an unusual course, with concrete for the first mile or so and lots of turns, zig-zagging through soccer fields.

That was the fastest time by a female Rowan runner this season.

That was their last meet. Under normal circumstances, Borst would have qualified for the 3A state meet, but fewer runners qualified this year

“It was a hard day in the regional, really cold and snowy,” Borst said.

“We never, ever got warm,” added Corley. “But I wore an undershirt and once you were out there running, it wasn’t so bad.”

Ihme will count on Borst and Corley to lead another charge next season, as Carson moves into a new, expanded league.

“I think their friendship and commitment to their team is what keeps them improving,”  Ihme said. “I’m very excited that they both will get to run track this year together. I think that is going to be significant in their cross country success next year.”
It all started with Ihme’s successful recruiting pitch. She hopes Corley and Borst will be role models for other girls to follow. She’s thankful they gave cross country a shot.
“There are girls that if they just try cross country, it might become the sport they are most successful at,” Ihme said.
•••
Several other girls had special seasons.
•  Salisbury junior Sutton Webb wasn’t permitted to run in the Rowan County Championships, but she placed fourth in the Central Carolina Conference and seventh in the 2A Midwest Regional. A Georgia soccer commit, she had a 21:35 clocking in the 2A state championship  meet in Kernersville.
• CCC champion Bethany Rymer, a South Rowan junior, also won a big meet at Fisher River Park in Dobson. Rymer led South’s team to a berth in the state meet. She clocked 21:58 in the 2A state championships and led the Raiders to a ninth-place finish. Rymer was fifth in the county meet.
• East Rowan junior Meredith Bonner missed the Rowan County Championships due to an injury in an auto accident, but she placed fourth in the NPC championships and finished right behind Corley in the 3A West Regional. She won some November meets before her accident.
• Also all-county are girls who finished in the top 12 in the county meet. That group includes Carson’s Lani Isley, Brynn Sokolowski, Haley Borst and Kendall Barbee; East’s Jayden Featherstone and Chelsea Earnhardt; West’s Megyn Spicer and Kaitlyn Ackman, and South’s Madison Beaver
••• 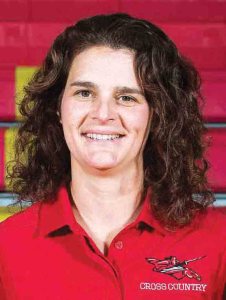 Coaches of the year are Ihme, for leading Carson to county and conference titles, and South’s Rebekah Frick Julian, for leading the Raiders to a conference championship and their first team appearance in the state meet.